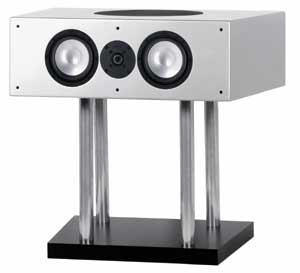 Karat Reference 2 DC Center is the best center channel loudspeaker the company has ever offered.

Canton’s Karat Reference 2 DC Center is a full-range center channel speaker that employs the same driver complement and enclosure engineering used in the company’s critically lauded Karat Reference 2 DC floor-standing speaker. These driver and cabinet advances are integrated using the company’s most sophisticated crossover network to date. This high level of engineering is complemented by the exceptional craftsmanship and visual design for which Canton has long been famous. The result is a loudspeaker designed to appeal the most discriminating audiophiles and home theater enthusiasts.

“This is the company’s ultimate center channel speaker,” said Canton USA president, Paul Madsen. “Canton’s engineering team took the challenge of replicating the remarkable performance of the Reference 2 DC tower in a center channel speaker. The result is a speaker that will go toe to toe with nearly any loudspeaker in the world, center channel or otherwise.”

The Canton Karat Reference 2 DC Center has an unusual trapezoidal cabinet made from multiple-density laminate that is 1-1/4 inches thick that consists of a layer of high-density particleboard laminated to a layer of lower-density board. This combination is not only stronger than other speakers, but is also much more acoustically inert. The heavily braced cabinet is divided into five sonically isolated chambers, and has absolutely no parallel internal surfaces that could create standing waves. The shape also provides relatively large cabinet volume for excellent bass, while presenting a low-height front panel that minimizes diffraction and is more visually appealing than taller designs.

One of the greatest challenges in developing the Karat Reference 2 Center was the adaptation of the mid/tweeter arrangement to a horizontal configuration. Conventional horizontal MTM designs suffer from dispersion irregularities caused by adverse cancellations between the drivers in the midrange frequencies. In order to negate these interactions, Canton engineers adapted the crossover network to a 3-1/2 way design, with one of the two midrange drivers reproducing the upper bass range from 150 Hz to 450 Hz while the other goes from 150 Hz to 3,200 Hz. The horizontal dispersion is improved because the shorter wavelengths are now only produced by a single driver. There is also some improvement in upper bass output.

One of the key design goals for the Karat Reference 2 DC Center was to maintain the exceptional bass performance that the Reference series is known for, both in terms of high output levels and extended low frequency range and accuracy. This is accomplished through optimal integration of the acoustic suspension enclosure with the woofer and crossover, plus the careful application of Canton’s proven Displacement Control high-pass filtering technology, which extends the low frequency response by one-half octave. DC technology prevents the top-mounted 12-inch woofer from responding to signals that are below the natural resonance frequency of the system. When conventional speakers without DC attempt to reproduce such signals, they absorb excessive amounts of power in attempting to create extreme excursions that produce little audible output. The result of this would be very high levels of bass harmonic distortion as well as lower efficiency and power handling capabilities. Consequently, DC technology lowers bass distortion and channels the energy where it can be used to improve the low-frequency extension of the system.

The Reference Center features a highly ‘tuned’ version of Canton’s proven 1-inch dome tweeter, which features a dome and voice-coil former fashioned from a single piece of aluminum-manganese alloy. When compared with conventional two-piece glued domes and formers, the Canton tweeter provides a much more direct coupling between the voice coil and the diaphragm. It also allows the dome to act as a radiator to cool the coils at high power levels. In the Reference 2 Center, this classic Canton tweeter was modified with a high energy neodymium ring magnet, added magnetic shielding to better contain the higher magnetic flux levels, and improved internal venting to prevent compression effects which can impinge on dynamic response.

The Reference 2 Center’s 7-inch aluminum mid/bass and midrange drivers each feature an unusual concave dustcap that helps to maintain greater linearity and better dispersion characteristics across a broad frequency range. The dustcaps are formed from the same material as the cones themselves, providing for multiple resonance paths to prevent the formation of clearly defined standing waves across the face of the driver. Other enhancements in the Reference series drivers include a redesigned double-ferrite shielded magnet system, and a sinusoidally-shaped injected rubber surround for improved linearity, frequency response, and power handling characteristics.

The Canton Karat Reference 2 DC Center is finished in a stunning silver lacquer with a black fabric cover. It will be available in January 2005 with a suggested retail price of $5,000 each.

For more information about this and other fine Canton products, please visit the company’s website at http://www.cantonusa.com, or call 612-706-9250 for the name of your nearest Canton dealer.