At CES 2016, Bryston introduced its new Cubed Series lineup of solid state power amplifiers, replacing the award-winning Squared Series (SST2) that made its debut at the 2009 CES. The Cubed series is available in two variants, one for professional applications (PRO version) and one for regular users (C-Series). The amps are designed to appeal to audiophiles, home theater enthusiasts, or for professional audio installations.

The new lineup will roll out in phases, with the 2.5B3, the 3B3, the 4B3, the 7B3, and the 14B3 being first to market. The flagship 28B3 is in the final design stages currently. Engineering achievements are at the forefront of the new designs, featuring a patented super-linear, low noise input buffer jointly developed by Bryston and the late Ph.D. engineer Dr. Ioan Alexandru Salomie. The Cubed Series also has a more robust RF and audio frequency noise filtering circuit before the power supplies to prevent unwanted anomalies on the power line from interfering even minutely with the audio signal. And finally the new amplifiers will feature an elegantly redesigned milled aluminum front panel.

“Due to the lasting success of the Squared Series amplifiers, our engineers were afforded the luxury of being able to spend lots of time precisely developing this new line of amplifiers,” explained Bryston CEO Chris Russell. “The innovative circuitry designed with Dr. Salomie is brilliant and we plan to use more of it in future products. Some of the audible improvements we have noted during our initial testing consist of expanded spaciousness and depth of focus, better overall dimensionality, improved mid-bass clarity, and more air and openness in the high-frequencies.”

All Cubed Series electronics feature a new patented input circuit that is precisely optimized and linear beyond any the company has used before. Featuring twelve active devices in a groundbreaking array, this new circuit both matches the amplifier to virtually any preamplifier and provides the first 6dB of gain. The company says the new input stage is so transparent, its measurable distortion is less than 1/1000th of 1 percent! 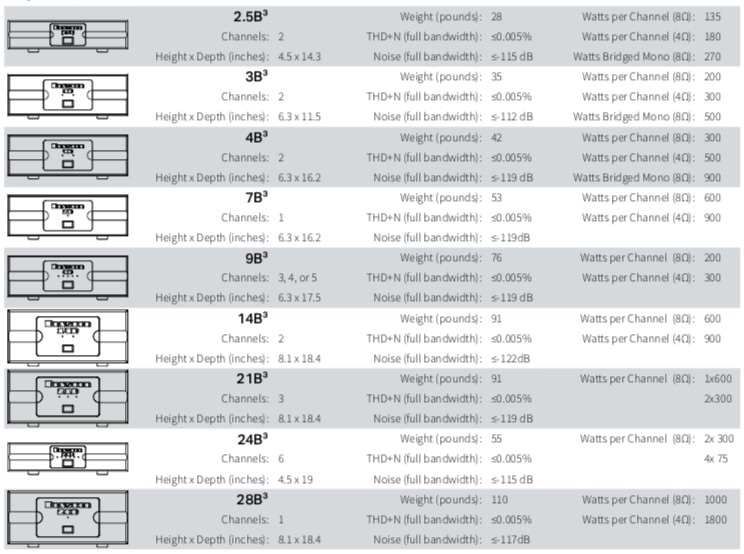 Bryston claims its newly designed circuitry in the Cubed Series amplifiers is virtually impervious to noise such as RFI and others induced by external and environmental causes. Bryston’s patented Salomie Circuit features a unique method of trapping distortion components in the main signal path that pass through other amplifiers only to be amplified and played by your loudspeakers. Bryston’s innovative distortion reduction method results in a much more natural and nuanced rendition of your recordings — playback more true to the original recordings and more enjoyable to your ears.

Quad-Complementary topology improves linearity to a new standard of accuracy while virtually eliminating aggressive higher harmonic distortion byproducts. Quad Complementary eliminates crossover distortion by improving transistor matching and reduces capacitance in the output stage by a factor of four which improves transient response and bandwidth. The overall harmonic distribution of Bryston’s Quad-Complementary output mimics the characteristics of a class-A design but with dramatically lower distortion. Each amplifier channel includes its own fully independent power supply with separate transformer — a feature uncommon even in amplifiers far more expensive.

All Bryston Cubed Series amplifiers come with a 20-year warranty.

Look no further to attain an incredible sounding turntable, then add your favorite cartridge to complete this stellar package.

Bryston LTD announced its BDP-1 digital music player built to to give music aficionados the ability to enjoy their library of high-resolution digital music...