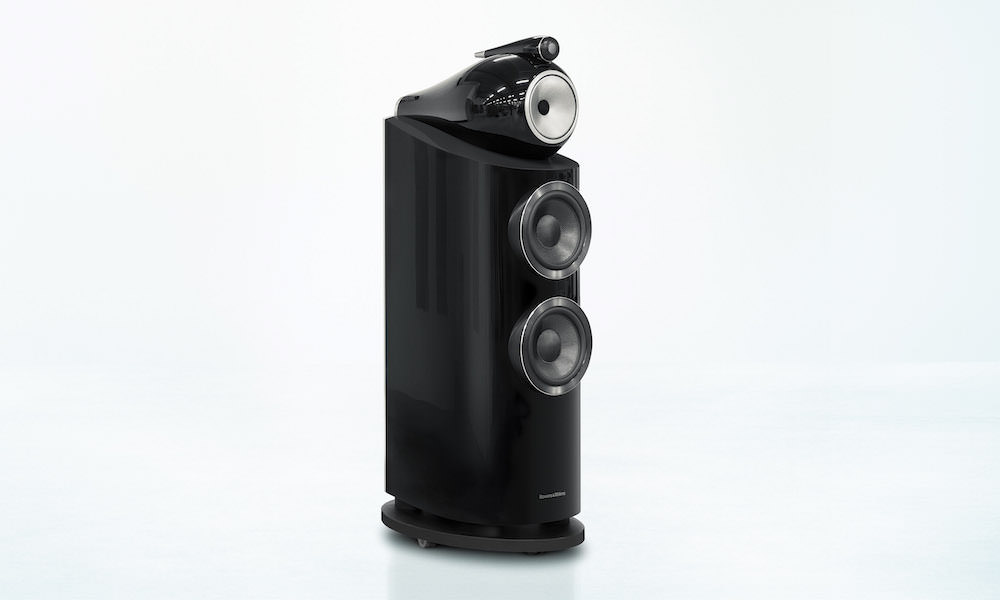 Bowers & Wilkins today introduced the new, reimagined 800 Series Diamond audiophile loudspeakers, the result of an intensive seven-year project to make the best better. A combination of tireless research and development, advanced engineering, and countless hours of listening by the very best ears in the business have produced a range of loudspeakers that places the listener closer to the recording than ever thought possible.

The fundamental evolution of the range is such that almost all of the component parts are different from the outgoing 800 Series Diamond. As Bowers & Wilkins Head of Research Martial Rousseau says, “This is not an update. This is a completely re-imagined design. One of the few remaining elements is the Diamond tweeter. We found it impossible to improve on the performance offered by diamond, although behind the diamond dome, the motor system was improved considerably.” 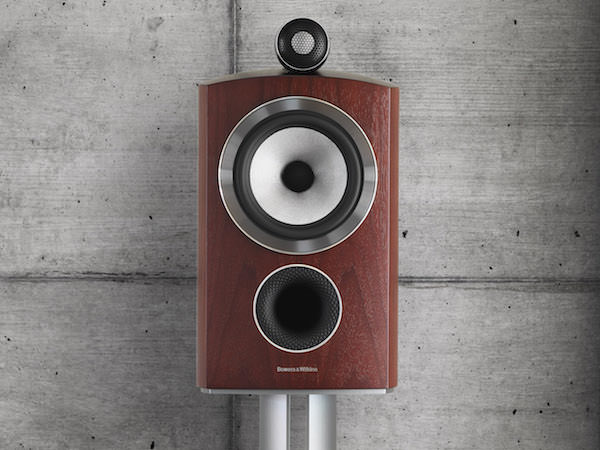 The exceptional Diamond dome may have been retained, but the rest of the loudspeaker has been thoroughly over-hauled to deliver uncompromising high-fidelity sound that sets a new benchmark for loudspeaker performance.

The changes involve a vast number of technological, engineering and acoustic innovations that combine to create a sublime listening experience. Most striking is the transformation of the midrange drive units. A new Continuum cone, developed in-house by Bowers & Wilkins engineers, replaces the Kevlar cones that have long been a major factor of the 800 Series’ famously realistic midrange performance.  The Continuum cone takes the best acoustic aspects of Kevlar further, providing a level of clarity that simply must be heard to be appreciated. Bass performance has also been dramatically improved by the introduction of the Aerofoil cone, which considerably reduces distortion thanks to a new variable profile cone geometry more advanced sandwich construction. 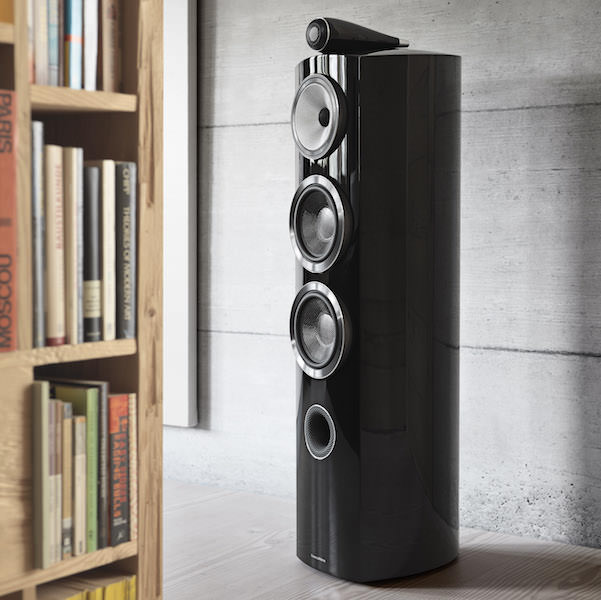 These innovations, when teamed with dramatically improved cabinets, more robust Matrix bracing system, a new solid body tweeter assembly and the vastly improved Turbine head midrange enclosure means distortion has been reduced dramatically in every regard, revealing a level of clarity that seems inconceivable.

The new industrial design is both a radical departure and, paradoxically, a subtle change that preserves Bowers & Wilkins’ unique design aesthetic; a slender, more modern industrial design that remains true to Bowers & Wilkins long tradition. With distinctive aluminum pods on all models securing and decoupling drivers from the enclosure, and the Turbine head constructed from a single piece of aluminum sitting on a sleek reverse-wrap cabinet on the “headed” models, the luminously finished cabinets are crafted from layers of wood, curved into shape under intense pressure. The new 800 Series inspires thoughts of architectural triumph with its sumptuous, acoustically derived lines. 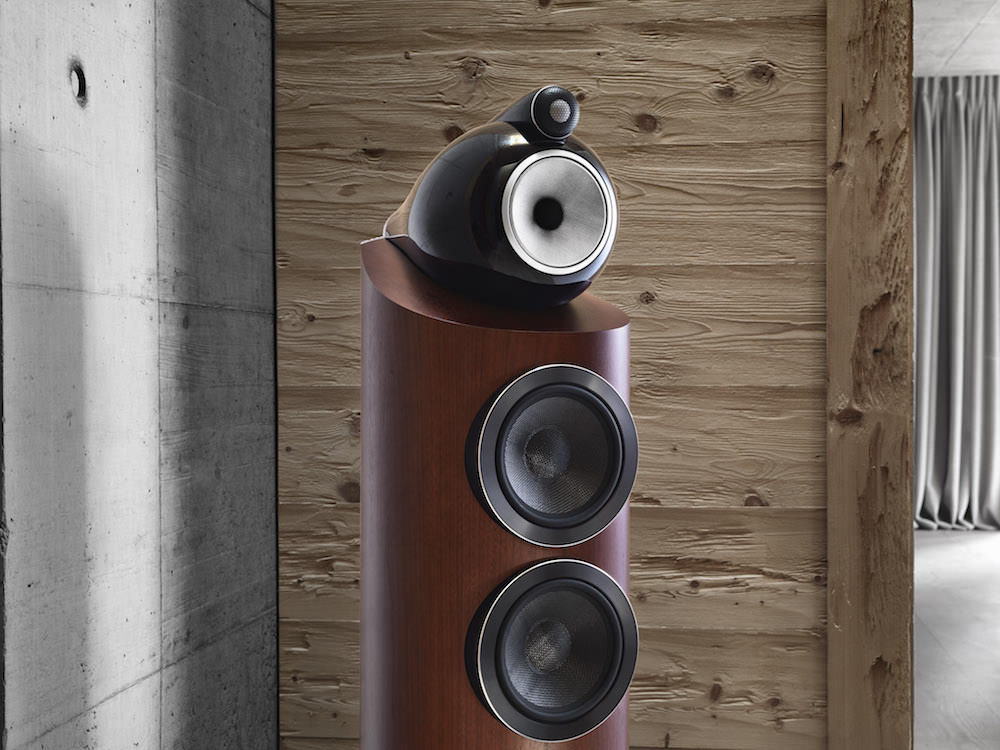 Testament to Bowers & Wilkins desire to manufacture consistently class-leading loudspeakers, the entire manufacturing plant in Worthing, West Sussex, UK was redesigned specifically for production of the new 800 Series Diamond – a enormous investment in tooling, materials and processes to ensure that every model produced is a perfect replica of the reference master.

802 D3
If you’re looking for stunning realism without the studio-sized footprint, the 802 D3 is the answer. The Diamond tweeter, Turbine head and Continuum cone deliver pristine sound, while the 802 D3’s proportions make it a comfortable fit for larger domestic spaces as well as recording environments. At home or in the studio, it will reveal depth and detail in music you never knew existed.

803 D3
The first of its kind full-range, studio-quality speaker built for the home, and the most compact headed unit B&W has ever produced. While this elegant speaker comes in a living room-friendly size, it shares the same revolutionary technologies and design features as its larger sibling, including the Turbine head and reverse-wrap cabinet.

804 D3
It might have a more traditional appearance than other speakers in the range, but don’t let that fool you. The 804 D3 delivers incredible acoustic transparency, thanks to unique 800 Series Diamond features such as our Continuum cone and augmented Matrix bracing system. So while its looks may be conventional, its performance is anything but.

805 D3
The smallest speaker in the 800 Series Diamond range is also one of the most groundbreaking. Packed with cutting-edge technologies never seen before in a speaker of its class, it’s the only stand-mounted speaker in the world to feature a Diamond dome tweeter. For lifelike spaciousness and detail, no other small speaker comes close.

The 800 Series Diamond is a game-changer in terms of technological innovation. From drive units to cabinet geometry, every major component has been rethought and reinvented. And the rulebook for loudspeaker design has been ripped up and rewritten in the process. The future of loudspeaker technology starts here.

Turbine head
Hear the sound, not the cabinet. That’s the principle behind our separate head units – a feature we introduced when we launched the first 800 Series speaker in 1979. Now, thanks to a radical redesign, the 800 Series Diamond head unit performs better than ever. Constructed from a single piece of aluminum, braced with internal radial fins and with a raised, slimmer profile, the turbine head is almost totally inert, producing a sound that’s free from cabinet coloration.

Solid body tweeter
Vibration is the enemy of good sound. To minimize vibrations, you need components that are as stiff as possible. For the 800 Series Diamond, we created our stiffest tweeter enclosure yet. The tweeter assembly for the new range is housed in a solid piece of aluminum, while an improved gel decoupling system isolates the tweeter from the effects of cabinet resonance. The result? Pin-sharp acoustic detail, and new levels of insight into a musical performance.

Continuum cone
For decades, we thought that nothing could beat Kevlar as a midrange cone material. But now, following eight years of intensive development, we’ve finally come up with something even better. Thanks to its composite construction, the Continuum cone avoids the abrupt transitions in behavior that can impair the performance of a conventional drive unit. The result is a more open, neutral performance. And a giant leap forward for loudspeaker design.

Thanks to computer modelling, the design of the 800 Series Diamond midrange chassis has been completely overhauled. The new chassis is engineered for superior stiffness, while tuned-mass dampers help to reduce unwanted vibrations to a bare minimum.

Aerofoil cone
Sometimes, new technologies allow us to achieve things in engineering that wouldn’t have been possible a few years ago. The Aerofoil bass cone is a perfect example. By using advanced computer modeling and a new syntactic core material, we’ve been able to produce a cone of varying thickness, with maximum stiffness where it’s needed most. This optimized shape means the cone displays pistonic behavior further up the audible range, producing bass that’s precise, controlled and utterly lifelike.

Reverse wrap cabinet
When it came to designing the ideal shape for the 800 Series Diamond cabinet, we did a U-turn. Quite literally. Instead of a flat-fronted speaker with a curving back, we produced a cabinet with a front and sides formed of one continuous curve, held together with a spine of solid aluminum. Fewer joins make for a stiffer, more inert structure, and a curved front means less baffling around the drive units. So sound dispersion is improved, and cabinet reflection is reduced.

Matrix
Matrix provides the backbone for our speakers. It’s an internal structure that works like the bracing of a ship’s hull, with criss-crossed interlocking panels keeping our cabinets rigid and inert. For the 800 Series Diamond, we’ve introduced our most radical rethink of the Matrix concept yet. The internal panels are thicker, solid plywood has replaced MDF, and metal components have been added to reinforce key stress points. All together it’s the most solid Matrix system we’ve ever built.

Plinth
A great speaker needs a rock-solid foundation. By moving the crossover from the plinth to the main body of the speaker, we’ve been able to create a base for the 800 Series Diamond that’s more stable and resonance-resistant than ever. Replacing the original open-box design, the new plinth is constructed from a solid piece of aluminum weighing in at a mighty 35kg. This improves stability by lowering the center of mass and counter-balancing the weight of the turbine head.

The base of larger 800 Series Diamond speakers are fitted with castors to allow you to maneuver your speakers into position easily. Replacing these castors with floor spikes used to be a tricky proposition, involving tipping your speaker on its side. Not so with new 800 Series Diamond speakers, which come with integrated floor spikes that can be lowered or raised with a simple twist of a cog.

Diamond domes
Some things don’t change. While almost every component of the 800 Series Diamond has been reinvented, the element that gave the range its name remains unchanged: the speaker’s diamond tweeter domes. Our diamond domes remain the ultimate in tweeter technology, capable of unrivalled acoustic detail, naturalism and spaciousness.  But behind the dome, an all new motor system improves on what was already the best tweeter in the world.

Making diamond the natural way takes seismic pressures, volcanic temperatures and around two billion years. Thankfully, science has found a way to shortcut the process. Using chemical vapor deposition, our diamond domes are grown like crystals in super-heated furnaces under laboratory conditions, before being cut to produce the perfect tweeter dome shape.