BMW announced it will offer an optional high-end surround sound system designed by Bang & Olufsen for its new BMW 6 Series Convertible (as well as the previously announced BMW 6 Series Coupe).

With 12 active loudspeakers driven by 1,000 watts of power, the Bang & Olufsen high-end Surround Sound system for the BMW 6 Series Convertible has all the power it needs to deliver rich, convincing sound. Each of the five tweeters is paired with a mid-range loudspeaker to deliver a homogeneous loudspeaker set-up, while the two potent subwoofers located under the front seats are directly mounted to the body of the car. This BMW-patented design eliminates vibrations from the subwoofers to produce an even cleaner sound performance. 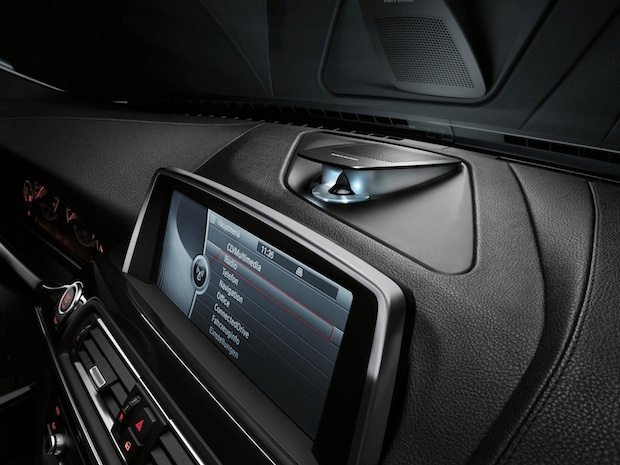 The patented Bang & Olufsen Acoustic Lens Technology also plays its part, distributing sound horizontally with 180 degrees of dispersion to give the best possible acoustic experience from anywhere in front of the speaker. On closer inspection, the acoustic lens cover reveals an additional mid-range loudspeaker that delivers perfectly balanced sound throughout the cabin.

Under the skin, the all new system also incorporates Dynamic Sound Optimization, which uses sound data gathered from a microphone mounted in the cabin to constantly adjust the sound according to conditions outside the car, such as rain and changing road surfaces.

For the BMW 6 Series Convertible, an additional sensor automatically instructs the Digital Signal Processor (DSP) of the sound system to adapt the sound performance to suit the altered ambient cabin conditions, whenever the soft top is raised or lowered. 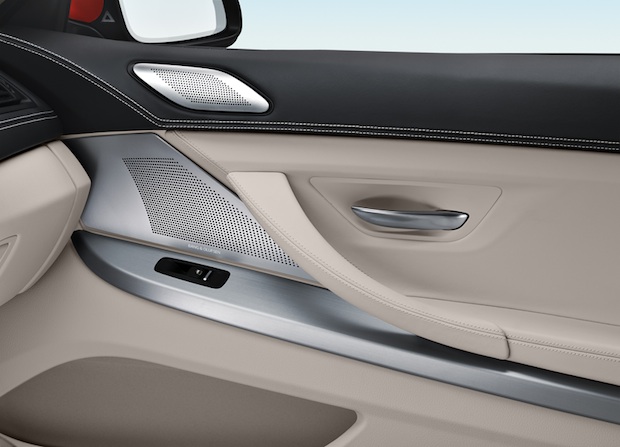 In addition, two distinct sound modes integrated into the all new system create two quite different sound experiences. Studio Mode produces a wonderfully vibrant sound stage that reproduces sound as the artist intended, while the new Expanded Mode widens the sound stage to give passengers the impression that they are in a much larger space.

High-end design
The new design of the new Bang & Olufsen high-end Surround Sound system for the BMW 6 Series Convertible is more than a match for the great sound. With a clean, yet distinctive style that is perfectly integrated into the BMW interior design approach, the new system has a range of impressive design features that discerning consumers have come to expect, as well as some that are unique to this model, such as the Floating Frame solid aluminum grills. Special mountings separate grill from frame, giving the illusion that the grill is floating in mid-air. This space between the grill and frame also houses small LEDs that cast light subtly into the cabin when the system is activated.

The combination of light and sound is most impressively demonstrated when the system is activated. A loudspeaker cover in the center of the dashboard silently lifts to reveal the large acoustic lens while the embedded LED lights simultaneously turn on — a process we call Light Orchestration. 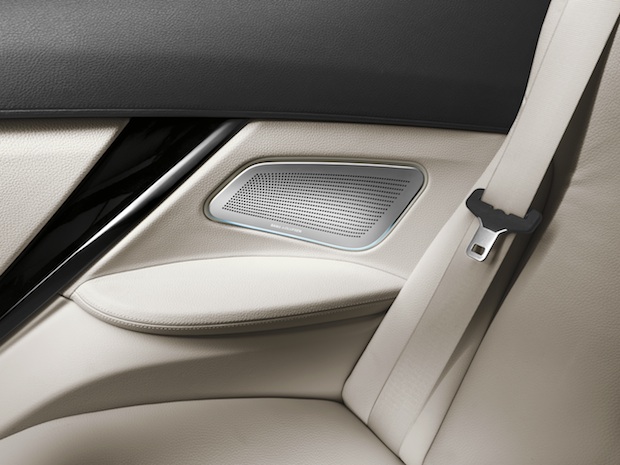 Also unique to the new system is the 'Perl Glanz' (Pearl Gloss) color and large-diameter, machine-drilled holes that appear in perfect alignment from any angle. As well as maximizing airflow through the grills, the large holes and overall grill appearance perfectly match the edgy, clean interior lines of the BMW 6 Series. For an added touch of refinement, the Bang & Olufsen name has been laser engraved onto the surface of the majority of the grills.