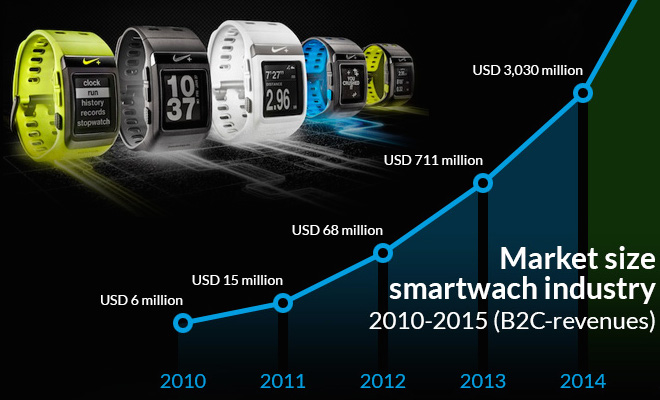 In 2013, the market volume for smartwatches stood at $711 million. Consumers bought three million units, up from just 300,000 the year before. Signaling a bright future for this wearable technology, research and development spending last year totaled $3 billion.

Sales are expected to top $12 billion by the end of 2015, with hundreds of global manufacturers competing for a slice of that pie, according to DreamChrono blog.

Samsung Galaxy Gear has rocketed to the top of the smartwatch pile, capturing 34% of the market share. The Gear 2 sold half a million units in May 2014 alone. The success of the brand’s Galaxy smartphones has no doubt given the company enormous momentum. Competing with Samsung, roughly 40 companies are currently offering some variety of smartwatch, including Garmin, Sony, Pebble and Casio. DreamChrono’s research suggest that as many as 200 companies will be in the business before the end of this year.

“Easily the most anticipated smartwatch on the horizon is the Apple iWatch. Apple has a built-in core of loyal customers, along with a reputation for pushing technology toward its next evolution,” remarked DreamChrono Founder Romain Brabant. “Today, the smartwatch with the most buzz is the Moto 360. It’s possible that consumers gravitate toward its round shape and overall appealing design.”

As the infographic demonstrates, price points for smartwatches are all over the board. Swiss-made Hyetis checks in at a cool $1,200, while renowned timepiece manufacturer Breitling blurs the line between smartwatch and luxury item with its $15,000 Emergency II. On the other end of spectrum, the Qihoo 360, designed and marketed for kids, is only about $30. Most smartwatches fall in the $100 to $300 range.

Functionality is a key characteristic driving the smartwatch craze. Several leading manufacturers – Nike and FitBit, for example – have staked out a market position by concentrating on health and wellness features. Other in-demand features include communication, personal assistance, security and gaming. App developers are quickly getting on board, seeing the growth in demand for innovative smartwatch applications. By the end of this year, DreamChrono anticipates that 100,000 app developers will be focusing on the smartwatch sector.