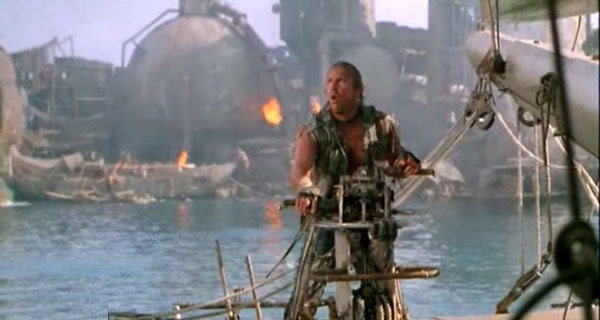 “This is my boat. I got it the way I like it. You take up space and you slow me down.”

— Mariner, Waterworld
The future never gets here fast enough until it’s the past.

It is certainly true of optical storage and right now blue laser technology.

Self proclaimed experts have been declaring each (BD, HD DVD) is winning and each is losing for months. Others proclaim that it will be DOA.

Let’s put this in perspective: 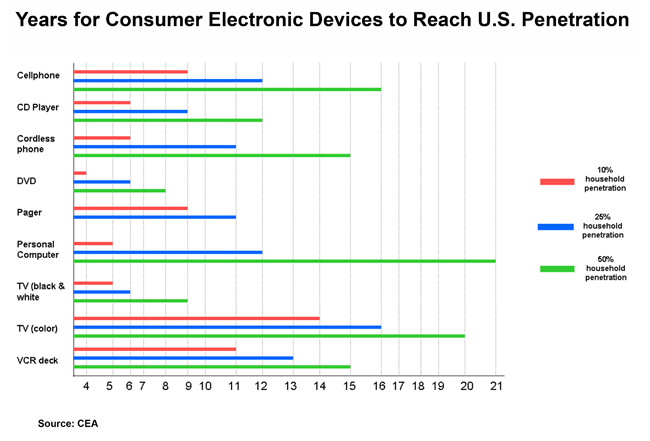 Take a look at figure 1. Things we take for granted today took a lifetime to be accepted.

According to the CEA none of these “gotta have” products are being used by 100% of the folks in the U.S. or anywhere else on the globe for that matter. Their research shows that as of early this year:

Now we’re asking all of these people to:

DVD products hit the market in ’96 and the first movies (Twister was the first) were better than videotapes for sure. It was Costner’s Waterworld though that really highlighted the superior quality of DVD.

It was the success story of the industry:

All of this despite the fact that there were different views on the best technology (+/-). It became a moot point when Sony rolled out their multi burner (DVD+/-R/RW) which was later followed by super multi units (addition of DVD-RAM).

Blue laser was in the works even before DVD was introduced. It took more than seven years just to get the cost of the blue laser mechanism down and the performance reliability up before it could be considered anything but a great lab project. 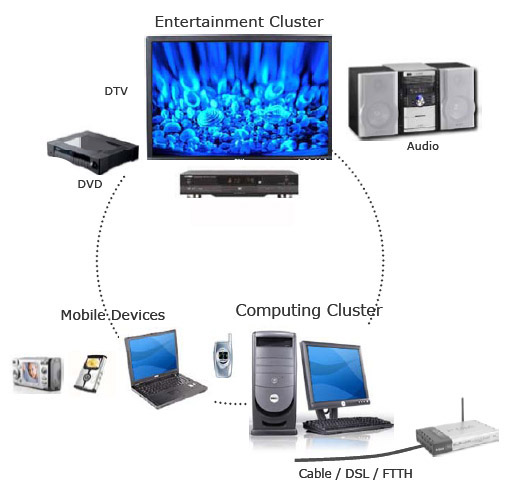 During that time a lot of things changed in the ways we thought about, used, enjoyed our content (Figure 2):

Even though we don’t have INet 2 or Net Neutrality, Sand Hill Road VCs are throwing big bucks at any start-up that says we deliver audio, video, content, news…

This is the next big goldmine for the Stanford MBAs.

All of the stars are in perfect alignment.

What? Oh crap !!! Someone forgot to ream out the pipe as much as the video requires (Figure 3).

No big deal. The new/old telcos will build out their pipelines right away. The cable folks will turn over all of their spare capacity. Satellite folks know the air is free. The people with the dark fiber in the ground will turn the lights on.

What do you mean we’ll talk about it???

Did you happen to notice something in Figure 2? Well… look again.

That circle centers on the home — apartment, dorm, trailer, lean-to, tent, whatever.

The content — audio, video, photo, data — requires storage and no one is right for everything — flash, HD, punch card, optical (Figure 3) !!! 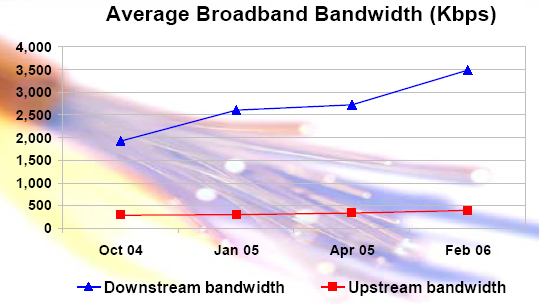 And you aren’t steering the best course yet because the seas can be uncertain and you can’t see who/what lies just over the horizon.

How soon before you do find dry land?

It is going to be “awhile!”

All they want is the other side to blink first.

All are in limited availability — as is media — but that isn’t a huge problem in the immediate future. Tellywood is only just beginning to bring out some of their movies and they are surrounding them with some wicked content protection.

At the same time, the flat-panel TV folks have to get LCD and plasma sales moving in Europe and the Americas.

Sales have been slow because of spotty availability of real HighDef signals/shows combined with high cost and a general feeling… “what I’ve got is good enough for the time being.” Price incentives around the first of ’07 will help but retailers have to get their sales people trained in what they are selling. In addition, they need to show standard def and HighDef side by side so ordinary folks can actually see the difference.

Once the viewing quality difference is understood, shows are widely available and prices break $1,000; HighDef TV sales will increase.

Then we can really focus on blue laser burner/recorder/player sales.

The silly millimeter difference could be a non-issue for BD and HD DVD by the first of the year.

LG had announced a hybrid player but then said … “sorry bout that.”

However Ricoh could do for blue laser what Sony did for DVD. These guys know advanced optical technology and they have announced the availability of a solution that will read both BD and HD DVD.

They’ve shown the prototypes and will be delivering production samples for evaluation… shortly.

Get enough OEMs to sign on board and watch how quickly the other guys roll super super multi units into their product lines.

Consumers won’t give a rat’s behind about format differences. They’ll buy/rent the movies they want based on… the content! 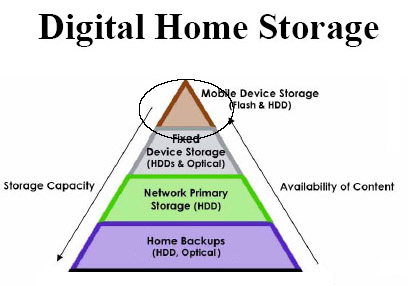 Burner users will go to the store and buy media based on price… quality… the manufacturer’s reputation for quality.

Sure Sony will still push BD units with their PS3 when it is rolled out this Fall and that will help BD. The system will not only be a wicked game system but also a very inexpensive HighDef video player. Now all Microsoft has to do is get game developers and players enthused about the Xbox and they can offer a similar solution for HD DVD videos.

Oh sure Ballmer has to get Vista out… so what’s the problem? 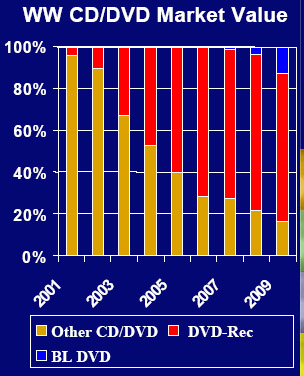 Blue laser technology will have a slow ramp over the next few years (Figure 5) because a DVD gotta-have rush doesn’t come along that often.

It was a helluva run and it isn’t over. Today’s DVD burners/players/recorders are dirt cheap. Media (single and dual layer) is inexpensive, plentiful and wildly compatible.

Every movie worth a shilling is available on DVD. You can play them now and well into the future — even when the blue whatever units are “reasonable” or you decide to recycle your present system.

Especially when there are so many “enlightened self interest” people involved and so many new ideas are struggling for our attention… and our dollars.