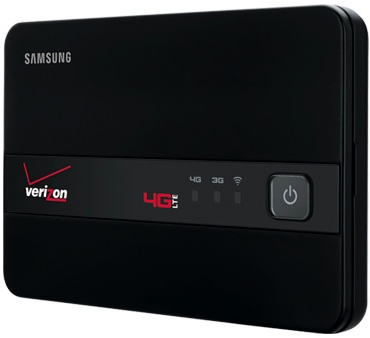 A good choice for those who live or travel to areas with strong 4G coverage and do not have a 4G enabled smartphone. However, short battery life or a $50 – $80/month data plan could be a deal breaker.

4G is a marketing term. It means different things to different people. However, LTE (an abbreviation for Long Term Evolution) is a term of art that describes Verizon’s fourth generation wireless network. The only factoid you need to know is, “Where it is fully deployed, Verizon’s 4G LTE Network is six to ten times faster than its 3G EVDO Network.”

Does speed really matter? Yes! Time is money. Not to get too geeky, but — you can expect download speeds of between five to 12 Mbps and upload speeds of two to five Mbps. What does that mean to normal people? In practice, a Verizon 4G connection will be about as fast an average cable modem and faster than most DSL modems. And, for most people, that means that a 4G connection is actually faster than the connection they have at the office. In other words — fast!

That said, it is early days in the world of 4G. The network is not fully deployed. So, in practice, the blazing speed of 4G is only available in limited geographical areas. I don’t believe the coverage map published by the carriers, after all, they are in the business of selling you coverage. To get the straight scoop on coverage there is wonderful interactive government resource at http://broadbandmap.gov. It will help you understand what kind of wireless broadband coverage is available in your area or anywhere in the USA.

Notwithstanding any of the above, an important, useful tool has just arrived from Verizon: The Samsung 4G LTE Mobile Hotspot SCH-LC11. If you want all of the geeky tech specs, there’s a good review by Laptop Magazine and a similar writing by PC Magazine.

But here’s the important stuff for non-technical users.

Verizon does not offer an unlimited 4G data plan. With your two-year contract you have a choice of 5GB per month for $50 or 10GB per month for $80. What happens if you go over the cap? You’ll pay an additional $10 for each 1GB of data transferred. If you’re a heavy user, this will get expensive.

Will I go over the data cap? Heavy users of video or all-day users of Pandora will probably exceed the data cap. It seems that the cap is in place to prevent you from using your 4G Hotspot as your household connection. At these prices, the strategy will work

What happens when I’m not in a 4G area? The device falls back to 3G.

How’s the battery life? It sucks! Just like most 4G devices, battery life is short. You’ll get a couple of hours. A specific design flaw with the SCH-LC11 is that you cannot turn off the 4G to save battery life when you’re in a known 3G area. It’s not a deal breaker, but I’m sure future 4G Mobile Hotspots will have this feature.

How much is it? Currently, it’s Free at LetsTalks.com or $29.99 at Wirefly.com with a new two-year 4G contract from Verizon Wireless.

Should I buy one now? If you do not have, or are not planning to purchase, a 4G phone, and you live and work or frequently travel to areas where there is real 4G Verizon coverage, then this is a good use of your broadband dollars.

What if I have a 4G phone? If you have the Verizon Thunderbolt or are planning to get Verizon’s upcoming Bionic or Atrix later this year, you should consider that all of the Verizon 4G Android phones offer a Hotspot option for an additional monthly fee. If you’re not constantly on the road with your computer and you are just an occasional hotel guest, this is the option for you. In many cases two days of hotel broadband fees cover the cost of the monthly Verizon 4G Hotspot option and the rest of your monthly travel connectivity is a bonus.

The bottom line. This is really the first Verizon 4G Hotspot and if you are a portable Hotspot user, this is a good an option as any. It is going to be faster than any mobile Hotspot from any other carrier. Beware of the data cap and beware of Wi-Fi leakage (you’ll always get 10 to 15 percent more speed out of this, or any, mobile hotspot device if it is tethered to your computer). Other than that, go for it!