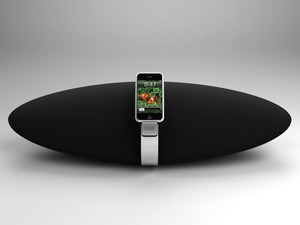 “Considering their customers, MusiciansFriend.com and GuitarCenter.com are unique and surprisingly appropriate outlets for Zeppelin,” says Bowers & Wilkins’ Executive V.P. Business Development, Evert Huizing. “Where many of the worlds greatest musicians record and master their sound tracks at studios using Bowers & Wilkins speakers it comes full circle for musicians to hear music played back just as it was originally intended to be heard.”

The Bowers & Wilkins Zeppelin is a one-piece amplified speaker system and docking station that transforms an iPod into an astonishingly capable yet highly compact stereo music system. Barely two feet wide, with a dramatic, tapered shape and beautifully finished in polished stainless steel, Zeppelin sets a new benchmark for both audio fidelity and appearance in this rapidly growing field.

The seductive design is purpose driven. Zeppelin’s tapered ends house the midrange and tweeter drivers in much the same way as the famous “pods” of Bowers & Wilkins’ world-class 800 Series loudspeakers, presenting a carefully curved profile that ensures a smooth response and even distribution of sound into the room. Each pair of midrange and tweeter drivers is spaced as far as possible to left and right to maximize stereo separation. Low frequencies are handled by a single five-inch “subwoofer” located in the center, its bass performance enhanced by the twin rear-firing ports. Three channels of amplification, each incorporating proprietary DSP (digital signal processing) tailored to fine-tune response of the five drivers, deliver real high-fidelity power: 50 watts for the woofer and 25 watts for each two-way mid/high-frequency section. The result: deep, loud, startlingly dynamic sound reproduction – reflecting its serious high-end audio credentials.

Zeppelin comes complete with a pebble-like, mini remote handset to provide convenient control of volume, source select and mute, working seamlessly with the iPod to command its play/pause and track-selection functions. When docked, the iPod also accesses a special Zeppelin “Speaker” menu, with five-position bass EQ to tune response for system placement or individual preference. Zeppelin’s rear S-video and composite-video outputs deliver iPod video to a big screen, and a combination analog/digital mini-jack input offers Zeppelin playback of virtually any non-iPod audio source. Also included is a dedicated tilt-base, to place the Zeppelin at the acoustically ideal angle for seated or standup listening.

About Musician’s Friend
Musician’s Friend, Incorporated is the world’s largest direct marketer of music gear and musical instruments. Its assortment of more than 58,000 products including guitars, bass guitars, pro audio, keyboards, live sound and recording equipment, and drums and percussion is marketed through its print catalogs and websites, including musiciansfriend.com.

Located in Medford, Oregon with warehousing in Kansas City, Missouri, and a call center in Salt Lake City, Utah, Musician’s Friend can be contacted at 1-800-776-5173, or by visiting
http://www.musiciansfriend.com