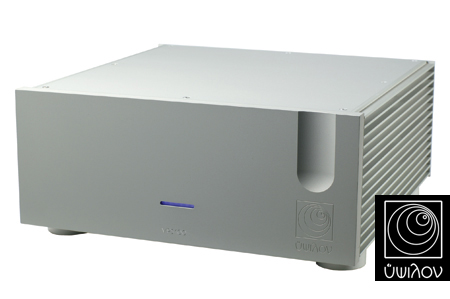 The VPS-100 is the result of extensive research into the design and implementation of new circuit topologies and materials. An elegant rectangle of burnished aluminum, it embodies new concepts employing proprietary ideas and circuitry that help it stand out from other phono stages. Chief among these are a passive RIAA equalization circuit with zero feedback, and tubes in its rectification and amplification stages.

RIAA equalization is a standard established by the Recording Industry Association of America for recording and playing vinyl records that permits greater playback times and improves sound quality. Ypsilon prefers passive RIAA equalization to active because active RIAA equalization  harbors a feedback loop containing the RIAA network. RIAA equalizer circuits are usually implemented with capacitors and resistors in so-called CR networks. But capacitors present a dielectric absorption effect, a delayed release of energy stored in the dielectric material that can produce a ringing in fundamental notes, often noticeable in piano music.

As a result, the VPS-100 uses a transformer-based inductance-capacitance-resistance (LCR) network instead of the more commonly used CR type. The transformer is a custom model designed and built by Ypsilon that uses a special amorphous c-core material and paper winding insulation. This creates an LCR network that sounds much more natural, musical and open than CR networks.

The VPS-100’s LCR network uses two gain stages and two T filters. The filters’ 2123Hz pole is formed by an air core inductor with virtually no stray capacitance at the first gain stage. The 50-500Hz pole is formed at a high signal level directly at the output of the second gain stage. The two stages use Siemens C3g tubes, which are very reliable and specified for 10,000 hours.

The VPS-100’s superb build quality includes a power supply that uses a 6CA4 tube rectifier and choke filter, a passively regulated DC heater for the tube in the first stage, and an AC heater in the second stage. The VPS-100 employs no printed circuit boards, and point-to-point silver wire specially extruded and annealed by Ypsilon. A custom-designed system mechanically de-couples the first gain stage and 2123 pole coils, while an aluminum sub-chassis mounted on the aluminum bottom plate creates a very rigid platform.

About Ypsilon
Ypsilon Electronics, based in Greece, is a highly regarded designer and manufacturer of innovative amplifiers, preamplifiers, DACs, CD Transports and related components. Founded by veteran sound engineers, Ypsilon is dedicated to developing products whose reproduced audio is indistinguishable from live music.