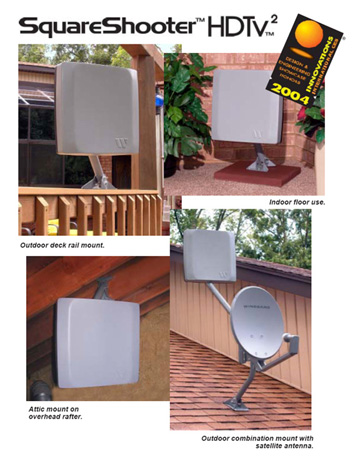 Burlington, Iowa, December 22, 2003. Winegard Company will introduce its newest High-Band VHF/UHF Digital/Analog/HDTV Antenna System at the CES 2004 show in January. Bob Howell, Director of Distribution Systems/Off-Air Antenna Division said the SquareShooter is a true technology and engineering marvel and the answer to the ultimate in Urban/Metropolitan HDTV Antenna Systems. The SquareShooter will be recognized quickly as a technological breakthrough, because it utilizes non-traditional electromagnetic antenna design for superior performance and, at the same time, provides that new contemporary “look and feel” desired by DTV/HDTV consumers. It will outperform all but the largest high-band VHF/UHF directional antennas systems on the market today.”

The SquareShooter solves problems no other antenna can solve. By far, the majority of the new antenna market today is directed at the Urban/Metropolitan locale. And the fastest growing sector of the market is in the Off-Air reception of HDTV broadcasts. The vast majority of these HDTV unit sales will be to these markets. The only current way to receive true HDTV resolution (1080i) is with an Off-Air antenna or satellite broadcast signals.

Bob Howell said “The reasons we contend that Winegard’s SquareShooter represents a true technological break-through are found in the following 2 very important facts:

1. Normal RF propagation theorem dictates that the full wave length diameter of an off-air antenna for channel 7 VHF at 175 Megahertz is 64 inches. The fact that we have a 15 inch square antenna design that can receive and modulate analog and DTV/HDTV signal 50 miles away from the signal source using a 15 inch element is an engineering marvel.

2. The antenna was specifically designed with a very high 20-to-1 front to back ratio that also accommodates the reception and modulation of both analog and DTV/HDTV reflected signals. This is critical for downtown urban locations where we might find, for example, viewers living on the wrong side of a 20th floor downtown high-rise with respect to the transmit tower of the TV station they want to receive. This antenna was specifically designed to allow pointing of the antenna at another building to zero-in on the desired reflected signal, reject all other multi-path signals and still be able to modulate analog and DTV/HDTV. This fact was proven in both our Chicago, IL and Tampa, FL beta tests.”

Specifically designed to receive and demodulate DTV/HDTV transmissions from reflected broadcast signals, the SquareShooter is uniquely suited for urban/metropolitan locations where line-of-sight to the transmit source is blocked. This 15″ square antenna can receive and demodulate clear analog broadcast signals up to 45 miles and outstanding DTV/HDTV signals over 50 miles from the transmit source and is ideal for the suburban market.

Because of its size and versatile installation options, it can be mounted practically anywhere for the best DTV/HDTV reception such as on wall, fascias, roofs, patios, attics, or railings. With the addition of our DS-1000 pole mount which meets DirecTV and Dish Network’s wind load requirements, the SquareShooter, when mounted above a satellite dish and diplexed with the satellite system, will incorporate satellite and Off-Air signal onto one coax cable.

Phillip Partian, Senior Vice President, Dow Electronics who asked to participate in the Beta field testing at CES 2003 had this to say about the SquareShooter “I’ve been around this industry for 33 years. I’ve seen and tested a lot of antennas. That’s afforded me a lot of practical experience with Off-Air antennas. I’ve conducted 50-60 seminars on Off-Air antennas over the past 5 years. And I’ve never seen an antenna like this antenna”

We’ve got our own antenna testing farm out back with over a dozen antennas in it. They’re mounted 25 to 30 feet high above our roof line to maximize their performance. Any height less than that, we get ghosting and multi-path from the test. We know we need that 25 foot height to get the signal. The signals that we get during these tests are naturally the most powerful channels, ABC, NBC, and CBS. And naturally the low and high range signals would come in fairly well, but we would still get some ghosting. Even using the Winegard WS-5646 or Channel Master 5646 Super V, we got ghosting.

We put the SquareShooter up on a 15 feet pole behind our building in the middle of our parking lot in an area that we knew from past experience we would get ghosting, because Bob Howell told me this unit had the ability to eliminate some ghosting, even at this lower height. We put it up, attached an amplifier, hooked it up to a TV set and the picture was absolutely phenomenal.

We compared testing with the Channel Master four bay bow tie and the SquareShooter outperformed it. I was amazed.

We tuned in on some Sarasota channels. Channel 40 in Sarasota is about 40 miles from were we’re located in Tampa and the SquareShooter brought it in. I’ve tested other antennas on Sarasota stations the size of our WS-0038 (Winegard special) and would just barely receive channel 40. Most people would say that it was not possible to pick up Channel 40 from Tampa with a traditional element antenna, even with one that large, let alone a small 15 inch square antenna, but I saw it with my own eyes. Not only did it pick up the signal, but it eliminated all ghosting. I was flabbergasted.

Another truly unique benefit of this antenna is its front-to-back ratio performance. It was smart of Winegard to incorporate in the design of the SquareShooter its ability to reject ghosting, particularly because that feature allows it to pick up ghost-free bounced signals. From our location, almost all of the transmit towers are due south, as is channel 40 in Sarasota. We pointed this antenna south and still picked up Channel 10 here in Tampa exceptionally well which was behind our building to the northeast and to the rear of the SquareShooter and Channel 32 which was behind us to the northwest. That ability to bring in that bounced signal, eliminating the ghosting, and deliver a clear signal, is truly exceptional.

We checked it from several other locations and it performed the same way in each of those locals. One place was exceptionally close to the towers and it did a terrific job. This was a good test because we have checked so many other antennas in the past and had their very poor results to compare with the SquareShooter.

Price is not a concern for me with the SquareShooter, because it does the job it’s supposed to do. It solves problems no other antenna can solve. We will be able to go into metropolitan areas where we now have a real ghosting problem, particularly for the reception of HDTV signals, were we have multi-path or co-channel interference concerns. The SquareShooter antenna will be a “Drop-dead” antenna for that market place and also for some analog channels that we have had some problems with in some metropolitan areas where we are not going to see local satellite availability.

The antenna offers extremely versatile mounting options and can be mounted practically anywhere. One of the best and fastest mounting options is over a satellite dish using the DS-1000 allowing for a 360 degree rotation to aim it at the transmitting towers and not need any more room than is already used for a 20 inch satellite dish.

It’s the antenna winner we’re looking for. It will sell itself once distributors see what it’s capable of doing. We’re very much looking forward to it.”

The Winegard Company is widely considered an innovator and pioneer in product design, performance and assembly and has consistently adapted to meet the challenges of the ever-changing electronics market. It remains committed to continuous improvement in the quality, cost and delivery of its products and services to effectively meet all of its customer’s needs and currently designs and manufactures more than 1,000 different products in four product lines distributed in all states and worldwide, including:
• Satellite Antennas and Mounts: Residential antennas ranging in size from 18 cm to 1 meter.
• Mobile Television Reception Products: RV, Trucking, and Marine applications. Satellite systems ranging from manual crank-up models to automatic satellite tracking systems with GPS/DVB. Off-air antennas including bi-directional and omni-directional VHF/UHF/FM antennas. Ground Antenna Mounts and Accessories.
• Off-Air Antennas: From DC to 5.8 gigs AM/FM/VHF/UHF Antenna Systems, Distribution and Pre-Amplifiers, Power Supplies and Accessories
• Telemetry: Medical and Data Antenna Systems, Distribution Amplifiers, Power Supplies and Accessories.
##

If you’d like more information about this topic, or to schedule an interview with Robert Howell please call Michael Sherman at 319-754-0604 or send an email to msher@winegard.com