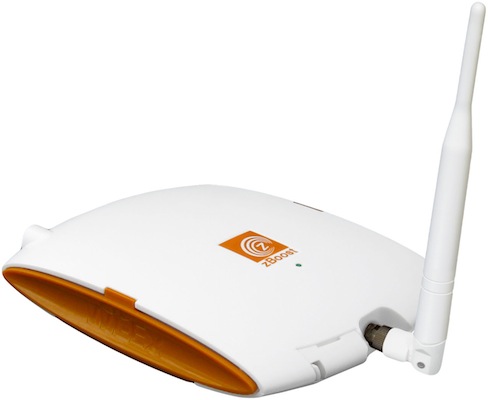 The new zBoost-SOHO YX545 provides consumers with several product enhancements which will optimize their cell phone signal in-doors including:

The zBoost-SOHO, like the entire line of zBoost products, features patented technology that protects the carrier network. The package includes everything you need: amplifier base unit, power supply, base unit antenna, coaxial cable (RG59-mini), signal antenna and mounting hardware. The wide radio wave beam width directional antenna receives signals from multiple cell towers. The zBoost-SOHO ($399) will be available in August.

“The growth of connected devices is staggering. Recent reports indicate that 59 percent of Americans access websites on their wireless devices including laptops and smart phones. With this continued increase in mobile traffic, a reliable in-door cell phone signal is a necessity for many consumers. The new zBoost-SOHO is an enhancement to our award winning Dual Band product and we believe the software improvements are essential to help keep consumers connected. At any time cell towers can adjust their signal or other obstacles can interfere and cause the zBoost to perform at a lower level. With the new improvements, the zBoost-SOHO optimizes itself every 24 hours — keeping consumers connected.”
— Lloyd R. Meese, CEO of Wi-Ex

About Wi-Ex
Wi-Ex, the leading provider of consumer cell phone signal boosters, developed zBoost, the first consumer-priced signal booster for the small office/home office (SOHO) cell phone market. Wi-Ex manufactures and distributes the zBoost line of cell phone signal extenders for the home, office or car. The zBoost product line works with most carriers in the US and abroad including AT&T, Sprint, Vodaphone, Verizon and T-Mobile. They were awarded a 2007 and 2010 Consumer Electronics Association Innovations Honoree by the Consumer Electronics Association (CEA). They also were selected as a finalist for the 2007 and 2009 CTIA Emerging Technologies (E-Tech) Award. As the leader, zBoost has more awards, more sales and more locations than all their competitors combined. Wi-Ex continues to develop innovative products to meet the demands of an increasingly wireless society by enhancing wireless signals.

Swirl today released an in-store mobile marketing study finding that 77 percent of consumers would be willing to share their smartphone location data as...