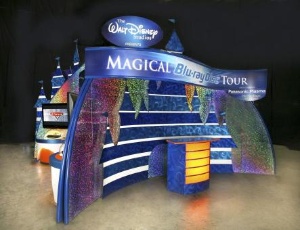 The Walt Disney Studios today announced the launch of Disney’s Magical Blu-ray Tour, which will visit 18 malls nationwide beginning August 17. The announcement was made by Bob Chapek, president of Walt Disney Studios Home Entertainment. Disney’s Magical Blu-ray Tour, sponsored by Panasonic, is an interactive exhibit designed to educate consumers about the new high-definition home entertainment technology and will feature interactive kiosks, viewing stations and a special presentation theater where consumers can experience first-hand the amazing capabilities and benefits of Blu-ray Disc technology. Disney’s Magical Blu-ray Tour will also focus on providing clarity for the growing consumer confusion around high-definition home entertainment and educating them on the benefits of Blu-ray Disc technology. The tour will kick-off in Los Angeles, the entertainment capital of the world, beginning August 17 at the Westfield Topanga mall in Canoga Park, CA and continue on to 17 additional locations across the U.S. 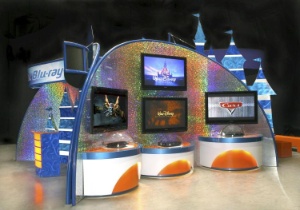 According to a recent survey by Leichtman Research Group(1), close to one-half of the 24 million households with HDTV don’t actually watch high-definition programs because they haven’t obtained the necessary hardware from their cable, phone or satellite operators. About one-half of those viewers — about six million — don’t even realize they’re not watching HDTV. The tour aims to educate consumers by delivering a comprehensive and entertaining high-definition Blu-ray experience, allowing them to interact with the technology and view live demonstrations hosted throughout each day of the tour.

“Disney has always put consumers first and we are here to help everyone understand this amazing new technology. It is imperative that we continue to educate and engage consumers as to the advantages and exciting features that are unique to the Blu-ray Disc format,” said Dick Cook, chairman of The Walt Disney Studios. “There are so many high-definition enabled households not taking full advantage of its capabilities and we hope to change that with the Disney Magical Blu-ray Tour.”

Disney’s Magical Blu-ray Tour will feature exciting first-look opportunities in each market including previews of Disney/Pixar’s Cars, as well as Disney’s Meet the Robinsons, and live demonstrations where consumers will get first-hand experience playing the interactive “Liar’s Dice” game from Pirates of the Caribbean: Dead Man’s Chest. The Mall Tour features six to fourteen interactive stations (depending on the size of the mall) which will showcase all aspects of the Blu-ray Disc technology. A special mini theater will host hourly live presentations on Blu-ray high-definition technology. To date, Disney has released such hits as Pirates of the Caribbean: The Curse of the Black Pearl, Pirates of the Caribbean: Dead Man’s Chest, The Guardian, The Prestige and many more on Blu-ray Disc.

“Our goal with the Disney Magical Blu-ray Tour is to reach as many people as possible and to help educate the consumers across all demographics,” said Bob Chapek, president of Walt Disney Studios Home Entertainment. “Our presentations and demo areas will hold something of interest for everyone, from kids and their parents, to older adults and teens. Even early adopters won’t be disappointed with the first looks of the bonus materials that we’re rolling out for our future titles. Since high definition is for everyone, we made sure that the Tour elements reflected that as well.”

“We are very excited to be working together with Disney to bring Blu-ray technology to consumers in this very personal, grassroots experience,” said Eisuke Tsuyuzaki, vice president Corporate Development & General Manager, Blu-ray Group for Panasonic. “Consumers will be blown away by the 1080p High Definition presentations we have in store for them and are sure to be excited about the biggest new development in home entertainment since the advent of DVD 10 years ago. Also, we are proud that Disney will be displaying these beautiful images on Panasonic Plasma TVs.”

Mall Tour Sweepstakes
Guests who visit Disney’s Magical Blu-ray Tour in each market can register to win a Blu-ray home entertainment package comprised of a Blu-ray player and a library of Disney Blu-ray Discs.

Mall Tour General Schedule
Disney’s Magical Blu-ray Tour, sponsored by Panasonic, will be open in all locations during regular malls hours from Friday – Sunday, with a special preview for the media on Friday mornings. The exhibits will be hosted by experts from both Disney and Panasonic, who will be available to answer questions about the technical aspects of Blu-ray and content featured on Disney Blu-ray Discs.

About Blu-ray Disc
The Blu-ray Disc format is currently the leading high-definition packaged media supported by the foremost entertainment companies in film, music, gaming and computer industries. In the U.S., Blu-ray is continuing to outsell the competing format week-by-week, maintaining a 70 percent market share per week of all high-definition titles sold this year.

About Panasonic Consumer Electronics Company
Based in Secaucus, N.J., Panasonic Consumer Electronics Company, a market and technology leader in high definition television, is a Division of Panasonic Corporation of North America, the principal North American subsidiary of Matsushita Electric Industrial Co. Ltd. (NYSE: MC) and the hub of Panasonic’s U.S. marketing, sales, service and R&D operations. Information about Panasonic products is available at panasonic.com. Additional company information for journalists is available at panasonic.com/pressroom.