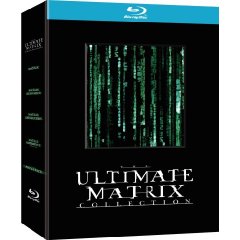 The Multi-Billion Dollar Franchise and the #1 Trilogy of the Past 25 Years The Animatrix Available for the First Time in High Definition Along with Digital Copy of The Matrix and In Movie Experience (IME)!

The Ultimate Matrix Collection brings the motion pictures that fans have most requested in high definition to Blu-ray™ Hi-Def for the first time on October 14 from Warner Home Video (WHV) and Village Roadshow Pictures (VRP). This seven-disc collection contains the complete Matrix Trilogy in high definition video and lossless high definition 5.1 audio (Dolby TrueHD) — each with hours of special features including WHV’s ground-breaking In-Movie Experience. The Animatrix, the nine-part anime film, is also included for the first time in high definition. Three additional bonus discs include more than 35 hours of additional features and a digital copy of The Matrix (for use with Windows Media and iPod portable devices) that even further immerses consumers into the ultimate Matrix experience. The Ultimate Matrix Collection will be available as a collection only and will sell for $129.95 SRP (Pre-order at Amazon.com). Order due date is September 9.

All Matrix films were written and directed by Andy and Larry Wachowski, who spent years nurturing and refining the movie’s breakthrough concepts, and were produced by Joel Silver.

The Matrix film franchise is one of Warner Bros.’ largest and most prestigious franchises with multi-billion dollar sales generated worldwide across a variety of media formats including theatrical, home video, broadcast, video games and publishing. All three films are in the top ten best-selling sci-fi films of all time and have been nominated for and won numerous awards, including four Oscars. The Matrix was the first film on DVD to hit the one million mark in sales during the launch of the format.