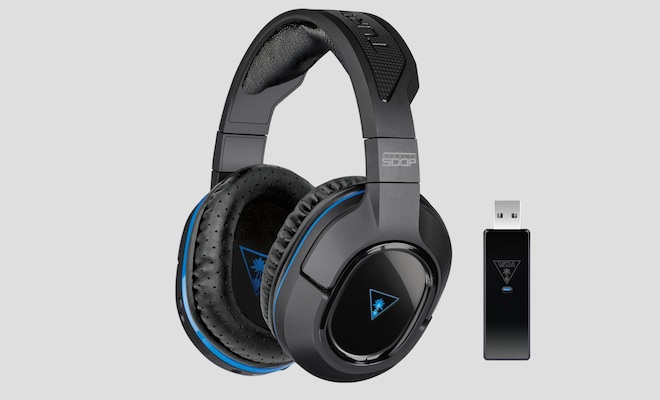 Turtle Beach today announced the Ear Force Stealth 500P fully wireless gaming headset with DTS Headphone:X 7.1 surround sound for PS4 and PS3 game consoles. The newly designed headset connects to the PS4 for chat audio with a simple USB wireless transmitter which is easy to connect and no bigger than a memory stick. An optical cable runs from the PS4 optical port to the transmitter for digital surround sound game audio.

DTS Headphone:X is an innovative new sound experience designed to make games, music and movies sound better over headphones by allowing much more discrete control over speaker position and angles than other surround sound headphone solutions can accomplish. For example, most surround sound mixes put the center channel about eight feet in front of the listener perceptually, which is the default for TV and film because the dialogue is coming from the screen. With a first person shooter and many other game genres, much of the center channel audio comes from the player’s character. For example, the sound of the player’s feet walking in the snow, their inbound radio, and the sound of spent cartridges being ejected from the player’s gun. Using DTS Headphone:X, the audio engineers at Turtle Beach created a gaming preset that pulls the center channel in towards the players’ midsection, and tilts it up, to make the placement of those sounds more realistic.

Separate control over chat and game volume, and microphone monitoring give game players the features and controls they expect in a quality gaming headset. The high-sensitivity, omni-directional mic allows for crystal clear chat and the microphone is removable in case you want to head out of the house without it. The Stealth 500P comes with a 3.5mm mobile cable so you can use it with a PS Vita, mobile phone or tablet. The rechargeable battery provides more than 15 hours of playing time.

The Stealth 500P includes custom DTS surround sound modes that have been finely tuned by Turtle Beach’s engineers for games, movies and music as well as a stereo mode. There are also four EQ settings that can be used with any of the surround modes, including Signature Sound, Bass Boost, Bass and Treble Boost, and Vocal Boost.