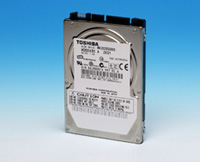 “We are delighted to announce the addition of this new 2.5-inch HDD to our line-up of perpendicular magnetic recording HDDs,” said Kazuyoshi Yamamori, Vice president of Storage Device Division at Toshiba Corporation’s Digital Media Network Company. “Larger data capacity in a small form factor HDD is essential for continued advances in the notebook PC market and in personal audio and video applications. As a global leader in small form factor HDD, we will continue to take technology advances to further generations and provide our customers with breakthroughs in capacity and performance.”

Toshiba is a recognized leader in HDD technology and products and a pioneer in applying perpendicular magnetic recording to high capacity products. The new 2.5-inch 200GB drive sets a new benchmark(*1) for areal density of 277.1 megabits per square millimeter (178.8 gigabits per square inch), boosting data capacity to 1.67 times that of Toshiba’s highest capacity conventional 2.5-inch drive(*3). The new drive is a slim 9.5 millimeters, as it contains only two hard-disk platters, but nonetheless has storage capacity of 200GB.

Toshiba will feature the new drive at Computex Taipei 2006, held in Taiwan from June 6 to 10 at booth B624.