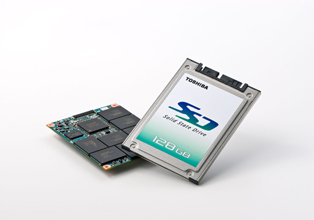 Toshiba Corporation announced its entry into the emerging market for NAND-flash-based solid state drive (SSD) with a series of products featuring multilevel-cell NAND flash memories. Offered in a range of form factors and densities, Toshiba’s solid state drives are designed primarily for notebook PCs. They will be showcased at the Consumer Electronics Show in Las Vegas, from January 7th to 10th. Samples and mass production will follow from the first quarter (January to March) of next year.

The new products utilize NAND flash memory fabricated with 56nm process technology, along with controller chips and DRAM, on a 70.6mm (L) x 53.6mm (W) x 3.0mm (H) platform. The maximum read speed is 100MB a second, and the maximum write speed of 40MB a second with the SATA2 interface (transfer rate of 3Gbps), which is compliant with high speed serial interface. The operating life is 1,000,000 hours*1.

Outline of the new products

*1: The MTTF (Mean Time to Failure) is not a guarantee or estimate of product life; it is a statistical value related to mean failure rates for a large number of products which may not accurately reflect actual operation. Actual operating life of the product may not resemble the MTTF.