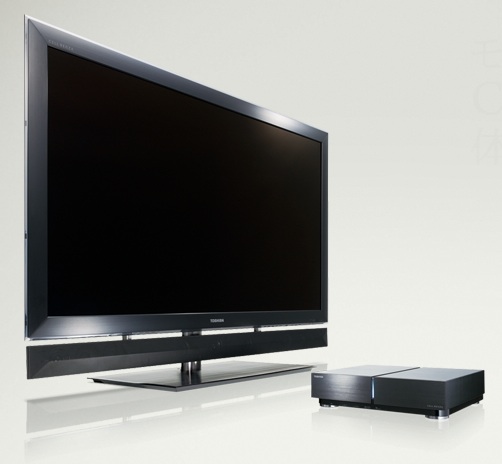 -Toshiba Corporation unveiled the future of home entertainment, the CELL REGZA 55X1. This new LCD TV, the flagship of the company’s REGZA line-up, offers viewers state-of-the-art picture quality, including a dynamic contrast ratio of 5,000,000:1, and supports this with ultra-high-speed processing and recording, enhanced navigation and seamless network interactivity. The CELL REGZA 55X1 will be available in the Japanese market from the beginning of December.

The heart of CELL REGZA is Toshiba’s CELL Platform. A combination of the high speed parallel processing of the Cell Broadband Engine™, specially developed for demanding multimedia applications, and Toshiba’s advanced image-processing algorithms, the CELL Platform achieves an arithmetic processing capability approximately 143 times that of the current top-of-the-line REGZA TV, allowing it to support unrivaled image-enhancing capabilities. These include:

Another distinguishing feature of CELL REGZA is its storage capacity: a 3-terabyte (TB) hard disk drive. Two terabytes of capacity are dedicated to the CELL REGZA’s “time-shift machine,”which can simultaneously record up to approximately 26 hours of programming for up to eight channels of digital terrestrial broadcasts. The time-shift machine allows viewers to catch up on missed programs simply by pressing the “time-shift machine” button on the remote control.

With the ability to store a massive amount of recorded programs, a fast, easy search function is essential. Toshiba delivers with “roaming navigation.” This allows viewers to find and display information on recorded, current and future programs simply by inserting an identifier–the title, person’s name, genre or related keywords.

The CELL REGZA consists of a striking, slim monitor and a stylish tuner that also integrates the hard disk drive. Both have a smoked aluminum finish, achieved with an alumite deposition process that lends the design a feeling of luxury. The remote controller is finished in the same way.

Drawing on some 80 years of experience in TV technology, and on synergies between its visual products, semiconductor and storage device businesses, Toshiba has developed CELL REGZA not only as the flagship model of its REGZA series, but also as a statement of the future of the LCD TV.

Background to Development
As Japan approaches the end of analogue broadcasting in 2011, the digital TV market has entered a period of diversifying customer needs. In order to meet demand for more vivid reproduction of high contrast, high definition images, simultaneous viewing and recording of multiple programs, along with access to broadband content, Toshiba has developed the CELL REGZA TV and its innovative CELL Platform.

Key Features of the CELL REGZA

Super Resolution Technology: Self-congruency captures edge detail
Self-congruency, a newly developed technology, reconstructs the edge of the picture with more detail and greater realism. It samples successive patterns with the same intensity around the edge of images, and then copies pixels from these more defined areas to other parts of the edge. The result is more precise detail and more realistic high definition images.

Super resolution technology: Brighter color and image definition
Digital images are rendered as a combination of “brightness” and “color” in each individual pixel. In normal digital broadcasts, the processor cannot match the pace at which data is delivered from the receiver, and data transfers are typically made with color information compressed to one-fourth that of brightness. The CELL Platform uses a Toshiba-developed algorithm to boost reproduction of color information to half the level of brightness information. Increasing color information reduces blurring at the edge of images, creating sharper, better defined pictures.

Peak luminance is boosted 2.5 times and enhanced by intelligent peak luminance control
A peak luminance of 1250cd/m2 (the display’s highest level of brightness and the maximum yet achieved in the industry) assures stunningly bright whites, while the wide dynamic range achieved by backlight luminance adjustment delivers a dynamic contrast ratio of 5,000,000:1, assuring deep, detailed blacks.

3. Doubling the effect of ClearScan 240
Toshiba’s ClearScan 240 defines the standard for blur-free fast moving images, but with the CELL REGZA the company sets the bar even higher. By combining the 120Hz scan rate of ClearScan 240 with its new Backlight Scanning technology, Toshiba now achieves 240Hz scanning that makes action scenes crisper than ever. The new double backlight scanning function divides the display into 16, against eight for current REGZA models.

5. Support for multiple recording and playback functions with a 3TB hard disk

CELL REGZA integrates a tuner supporting eight digital terrestrial channels, and its time-shift machine can store up to 2TB of recorded programs–that adds up to approximately 26 hours of programs simultaneously recorded from eight channels (the number of terrestrial digital channels available in Japan). Simply pressing the time-shift key on the remote control gives instant access to this huge library of recorded programs, and allows viewers to enjoy missed TV programs–or old favorites–whenever they like.}

“Roaming Navigator” can search for and deliver data on archived, on-the-air, and to-be-aired programs. A visual display centers on a thumbnail of the program chosen by the viewer, and other programs are shown circling this, either nearer or further, depending on relevancy. Searches can be based on program title, a character or actor’s name, genre or keyword. Relevancy-based searches deliver what you are looking for, and much more.

The split screen is nothing new, but an eight-window multi-display is. With multi-image display for up to eight digital channels, it is a lot easier for viewers to check out programs and make choices.

“Multi Thumbnail” displays recorded programs as a multi-display of 40 time-divided thumbnails, making it very easy to select and go to a particular scene.