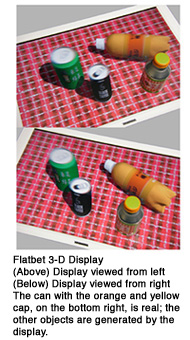 The Future is 3-D with Toshiba’s New Imaging Technology

Tokyo, 15 April, 2005 — Toshiba Corporation today announced a new display technology that allows 3-D images to be viewed on a flatbed display without any need for special glasses. Viewing the display from an angle allows the viewer to experience 3-D images that stand out several centimeters from the surface of the display. The new technology opens up new areas of application for 3-D displays, including arcade games, e-learning, simulations of buildings and landscapes, and even 3-D menus in restaurants.

Toshiba will continue to refine the technology, including integration of touch-screen control, and plans to commercialize products based on it within two years.

3-D displays that do not require aids such as glasses work by projecting slightly different images to each eye, a form of visual stereo. The displays consist of micro-lenses that control the direction of light emission, and supporting software that creates images. However, mainstream 3-D technology is limited in terms of the viewing angle at which it can display 3-D images, and the images are also tiring to view.

Toshiba’s new displays employ an integral imaging system that reproduces light beams similar of those produced by a real object, not its visual representation. This overcomes the main problem with a flatbed display: distance. The difference in the distance from the eye to the center of a display, and from the eye to the display’s edges and corners, is greater for a flatbed display than for a standard upright display. In seeking reproduction of natural 3-D images on the flatbed display, Toshiba developed proprietary software that utilizes 10 or more views of an object (the current prototype takes 12 or 16), either live-action images or CG images, and which processes and reproduces the images in 3-D, with a wide viewing angle. Toshiba also developed middleware and dedicated circuitry that supports fast playback of the images with only a graphics card.

On commercialization, Toshiba will deliver both the hardware and the software as a total solution.

The combination of advanced technologies achieves a full 3-D effect when viewed at an angle as wide as 30A° from the center of the screen, and from distances of over 30 cm. The naturalness of the image signal allows long viewing.

Toshiba has applied the new technology to 24- and 15.4- inch displays with 480 x 300 pixels, a resolution 1.5 times that found in the company’s conventional 3-D displays, allowing viewers to see high quality stereoscopic images.

The new display will be exhibited at the “The 1st Display 2005 International FPD Expo,” which will be held from April 20 to April 22, 2005 at Tokyo Big Sight in Tokyo, Japan. Display 2005 is an international trade show for all kinds of flat panel displays, including LCDs, PDPs, OLEDs and FEDs.

Principle for the 3-D Display: