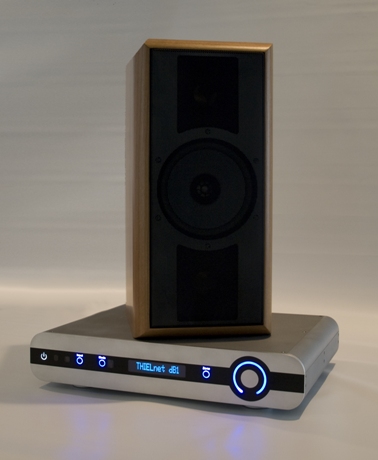 U.S. loudspeaker company THIEL Audio (www.thielaudio.com), has announced a cooperative effort with BICOM, a technology firm with over twenty years in the telecom industry, to create a new product called THIELnet™ — a high performance multiple zone digital audio system featuring IP based loudspeakers. THIELnet will be on display at CES 2008 in the THIEL booth located in the Sands/Venetian, room Bassano 2601.

The THIELnet™ Concept:
THIELnet™ has been designed to provide the user with audiophile quality plug-and-play multiple zone digital entertainment, delivering high quality surround sound and/or stereo playback to virtually any location in the home while greatly simplifying the “whole-house” installation process. The THIELnet™ system is a complete home entertainment solution that includes a digital audio distribution processor, full range powered IP based loudspeakers and subwoofer, and powered IP based amplifier modules to accommodate traditional non-THIELnet™ loudspeakers. Amazingly easy connectivity to each speaker can be achieved using nothing more than a standard Ethernet cable or even wireless technology. THIELnet™ will be available to consumers in either 5-channel (surround sound) or traditional 2-channel (stereo) packages that require only a source component (CD player, DVD player, MP3 player, etc.) to be fully functional.

The THIELnet™ system is comprised of the following components:

How THIELnet works:
Each THIELnet component is assigned its own unique IP address by the dB1 distribution processor, the heart of the THIELnet system. The dB1 outputs audio signals digitally instead of using standard speaker terminals. The dB1 distribution processor is a Dolby Digital compliant unit that has both analog and digital audio inputs, and a network switch output that resides on the user’s home network. The consumer can plug each of their THIELnet™ powered speakers and/or dS1 digital speaker modules either directly into the dB1 distribution processor or anywhere they wish on the home network to set up their audio system. The THIELnet™ digital speakers and speaker modules are each powered by an audiophile grade amplifier to further preserve and simplify connectivity.

The THIELnet™ dB1 distribution processor has an IR input on the front to support the supplied IR remote control. There is also an RS-232 port, +12V DC for trigger in and out, and IR in and out to allow for custom configurations. The flexibility of control on the dB1 distribution processor is intended to easily serve the most basic needs of the end user as well as the A/V systems installer who is using THIELnet™ to simplify a complex multi-zone audio installation. The dB1 distribution processor also incorporates a built-in network switch allowing direct connectivity to broadband Internet service, enabling easy firmware updates that could add future functionality (such as internet radio, etc.) as well as new DSP decoding algorithms should they become available from companies such as Dolby or DTS.

The THIELnet™ Streamer is a Microsoft Windows™ XP and Vista compatible software application designed to channel streaming audio from the user’s computer (be it a laptop or desktop) to the dB1 distribution processor. The application allows the user to enjoy audio content from their networked PC on their high-performance THIELnet™ system–all without having to run any cables. The THIELnet™ Streamer will automatically locate and send all of the audio data to the dB1 distribution processor.

CELEBRATING 30 YEARS OF HIGH PERFORMANCE IN 2007
THIEL Audio Products Company is a privately-held engineering-driven organization that performs research, design, and manufacturing of loudspeakers for the highest quality home music and video sound reproduction. Our products incorporate a variety of technological advancements in driver design, acoustical construction techniques, and crossover design. All our work is directed toward one end: to provide the most realistic sound reproduction possible. THIEL manufactures fourteen individual products; the surface-mount PowerPoint 1.2; in-wall PowerPlane1.2; in-ceiling HigherPlane1.2; flat-panel video display speaker ViewPoint; SS1, SS2, SS3, and SS4 subwoofers, the SmartSub Integrator; bookshelf-sized SCS4 and MCS1; and the floor-standing CS1.6, CS2.4, CS3.7, all ranging in price from $990 to $9,900 EA. (www.thielaudio.com)

About BICOM:
Since 1988, BICOM, Inc. is a leading manufacturer of DSP based media processing platforms and is recognized for developing high quality solutions with superior price performance. BICOM provides hardware and software “building blocks” for developing a wide range of computer telephony applications. BICOM’s media processing platforms range from 2 ports and up, providing both standard and custom interfaces to the analog, digital, packet (IP) and proprietary telephone networks. In 2006, BICOM Media Systems was established to focus on AV-centric multimedia projects. In 2007, BICOM Media Systems was chosen as a top finalist in an Intel media server design contest. More information on BICOM Telecom and BICOM Media Systems can be found at: www.bicom-inc.com