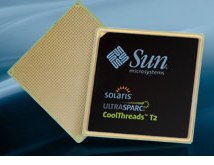 Sun Microsystems, Inc., (NASDAQ: SUNW) announced the world’s fastest commodity microprocessor, the UltraSPARC T2, as the cornerstone of its merchant portfolio of microelectronics. Available for sale separate from Sun’s own systems, this new processor is the industry’s first volume processor with eight cores and eight threads per core. Formerly known as the “Niagara 2” project, the UltraSPARC T2’s world-record performance raises the bar on commodity processors while boasting the industry’s highest energy efficiency per thread. With each thread capable of running its own operating system, the chip delivers a whopping 64-way system on a single chip. Sun will provide the UltraSPARC T2 processor design to the free and open source community via the GPL license.

“The market for commodity silicon and the devices they power is well into the tens of billions of dollars,” said David Yen, executive vice president of Microelectronics for Sun. “The UltraSPARC T2 processor also makes possible a new breed of compact, power-efficient, highly integrated devices-going beyond servers to routers, switches, network devices, medical imaging, industrial printing and more. With UltraSPARC T2 technology, we can bring the speed and scalability of chip multithreading into much wider use-and provide welcome alternatives to companies that want commodity economics without commodity performance.”

“We’re at a historic point in computing, moving away from sequential processing to multicore designs,” said Professor Dave Patterson, Pardee Chair of Computer Science for the University of California at Berkeley. “Hence, we need to invent new ways to evaluate these new parallel systems. Our initial experiments suggest that Niagara 2 has the highest performance, is the most power efficient and is the most ‘software friendly’ of the processors we’ve tested.”

The UltraSPARC T2 is the industry’s first processor to bring together the key functions of multiple systems-virtualization, processing, networking, security, floating point units and accelerated memory access. Integrating these elements on a single piece of silicon reduces cost and increases performance, reliability and energy efficiency-making it the superior choice for a diversity of workloads, from networking equipment to high-performance computing or storage devices. As a general-purpose processor, the UltraSPARC T2 also provides support for the massively threaded, open source Solaris operating system, and other real-time operating systems, as well as future versions of Ubuntu Linux, bringing a massive community of developers and productivity to the growing market.

“We are excited about exploring the capabilities of the UltraSPARC T2 processor,” said Mark Murphy, global alliances manager at Canonical, the commercial sponsor of Ubuntu. “We certify Ubuntu on the SPARC architecture as we believe it is at the forefront of what’s possible in processing and for many Ubuntu users this is of critical importance. UltraSPARC T2 shows Sun continues to push the boundaries and we are proud to be alongside pushing with them.”

A breakthrough in architectural design, the UltraSPARC T2 processor delivers an unprecedented level of integrated system functions on a single chip:

Sun, the Open Source Leader
Having surpassed 5,500 downloads of the OpenSPARC T1 source code, Sun is working to release source code for the UltraSPARC T2 processor to the OpenSPARC community at www.opensparc.net. Today Sun is announcing the following to give a head start to the development community around OpenSPARC T2:

About Sun Microsystems, Inc.
A singular vision — “The Network Is The Computer” — guides Sun in the development of technologies that power the world’s most important markets. Sun’s philosophy of sharing innovation and building communities is at the forefront of the next wave of computing: the Participation Age. Sun can be found in more than 100 countries and on the Web at http://sun.com.