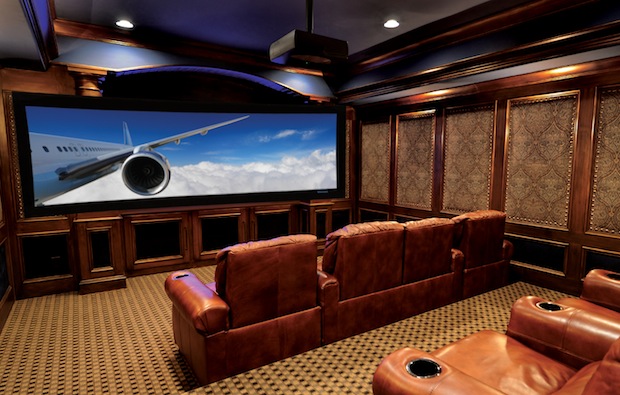 Stewart Filmscreen Corporation, the industry leader in precision projection screen technologies for the residential and commercial markets, today announced the newly designed Slimline CineCurve that has a narrower housing or frame bezel.

The CineCurve has been one of the most exciting screens to hit market in years and is one of Stewart Filmscreen’s top sellers. However, due to its housing size, there were instances where one had to sacrifice image size or could not fit the unit into the room. Stewart Filmscreen has addressed this concern with the Slimline CineCurve.

Engineered for use with a specially designed anamorphic lens that fits most of today’s top HD projectors, CineCurve models feature a native 2.40:1 image area. This allows full enjoyment and flexibility for viewing movies in their original theatrical aspect ratio since most Hollywood blockbusters are produced in formats, such as Cinemascope, where the movie is 2.35 times wider than it is high. When watching this aspect ratio on a 16:9 screen, 33% of the pixels are used to create annoying black bars, therefore reducing your image resolution.

The CineCurve maintains a constant vertical height with two electronically controlled masking panels that glide in from the left and right, creating the perfect image area for any aspect ratio. The curvature of the screen heightens the viewer’s sense of immersion, while reducing screen surface exposure to sidewall reflections of ambient light.

About Stewart Filmscreen
Stewart Filmscreen is the world’s premier projection-screen manufacturer for both the residential and commercial markets. A family-owned business, Stewart Filmscreen maintains the highest standards in screen design and craftsmanship. In fact, each screen is handmade. Founded in 1947, Stewart Filmscreen has grown from a small business to an international one, with offices in Denmark and Singapore, in addition to two in the United States, including a manufacturing facility in Ohio and their headquarters in So. California.