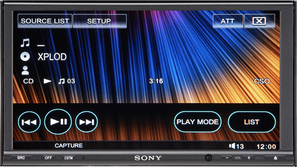 “This system offers the easiest way to create the ultimate in-car listening environment,” said Brennan Mullin, vice president of audio in the Digital Imaging and Audio Division at Sony Electronics. “You’ll see and hear the difference.”

Super Audio CD
The integrated SA-CD high-resolution audio format is based upon Direct Stream Digital ™ (DSD) technology. DSD records music signals at a sampling frequency of 2.822 MHz and converts them to 1-bit data.

Easy-to-Connect Digital Music
The video entertainment system’s intuitive user interface makes it easy to connect to and control external connected entertainment hardware devices and play video or digital music files. The model is satellite radio and iPod ready, so drivers can hook up their iPod player and, with a controller device sold separately, control their digital music libraries on the road. When connected to Sony’s HD Radio™ tuner, users can enjoy additional HD Radio channels, including many that feed rich information like artist names and song titles to the car stereo’s display. HD Radio can also display radio station names and genres, where available.

Drivers can command their digital music from behind the wheel or the back seat with a supplied remote card. They can connect through the rear auxiliary input with an audio cable (not included) to playback from portable MP3 players through the universal 3.5mm mini-plug input. The system offers a wide selection of playback options including DVD, DVD-R/RW, SA-CD, VCD, CD and CD-R. For a smooth sound during a bumpy ride, the Sony Drive S II feature makes the head unit resistant to interference from road vibrations.

Personalize It
To match drivers’ tastes, the XAV-W1 unit comes with personalization features that let them customize their display and sound settings. Using the capture function, drivers can set their wallpaper so their favorite image appears on screen. The time alignment, digital EQ7, and center speaker organizer features align sound from the car speakers and deliver it to car passengers’ ears simultaneously, ensuring one seamless sound no matter where they’re sitting. The system delivers 52 watts across four channels ensuring rich, clear sound.

While the 3AV input is used to connect to other audio-video devices, such as games or video cameras, the camera input connects with a rear-monitor camera and displays the image on the player’s screen to help you drive. With Zone by Zone capability, passengers can set separate audio zones for the front and rear seats.

It supports satellite radio, HD Radio and has iPod control readiness. The unit comes with a remote card and has an auxiliary input on the faceplate. Playback options include DVD, DVD-R/RW, SA-CD, VCD, CD and CD-R. It also has the Sony Drive S II feature.

Pricing and Availability
The XAV-W1 car video system featuring SA-CD audio will be available in August for about $800. The MEX-DV2000 player is available for about $280 at authorized dealers nationwide. More information about these players is available online at www.sony.com/xplod.