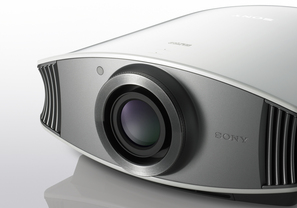 Pairing Sony’s critical eye for performance with the growing mass interest in the front projection market, the projector offers an practical step up for video fans looking for a full high-definition, large screen home theater solution.

“In the past, a high performance font projection system required a pitch-black room and expensive equipment,” said Philip Abram, vice president of television marketing for Sony Electronics. “Today’s introduction opens the front projection market to a much broader group of home theater enthusiasts.”

Also new is the VW50’s 1-chip video processing engine which enables the projector to use a fully digital chassis, eliminating signal noise caused by analog to digital or digital to analog conversion. The result is a highly detailed, smooth picture.

The VW50 also features dual HDMI inputs which support both 1080p/60 and 24p frame rates. It processes at a direct multiple of 24p to avoid artifacts like judder or flicker when viewing next generation high-definition formats like Blu-ray disc. Other inputs include component video, RGB, S-video and composite video. An RS-232C connection is included for flexible control options.

The new All Range Crisp Focus (ARC-F) lens, optimized for high resolution 1080 images, brings an even better picture into focus. The lens has 16 elements which allow for flexible throw distances making installation easier in less than ideal conditions.

The VW50 is also equipped with Advanced Iris 2, which produces accurate blacks and helps to deliver a dynamic contrast ratio of up to 15,000:1 when “auto” Iris mode is selected. The Advanced Iris 2 also features a variable setting allowing for user optimization. The projector also features 1.8x powered lens zoom, powered focus as well as powered vertical lens shift to adjust the location of the image for flexible installation locations. Like its predecessors, the VW50 unit’s advanced cooling structure produces a low fan noise of 22dB, critical for home theater applications.

The new VPL-VW50 projector will be available this month at Sony Style stores and online at www.sonystyle.com for $4,999.99. It will also be offered at authorized dealers nationwide.