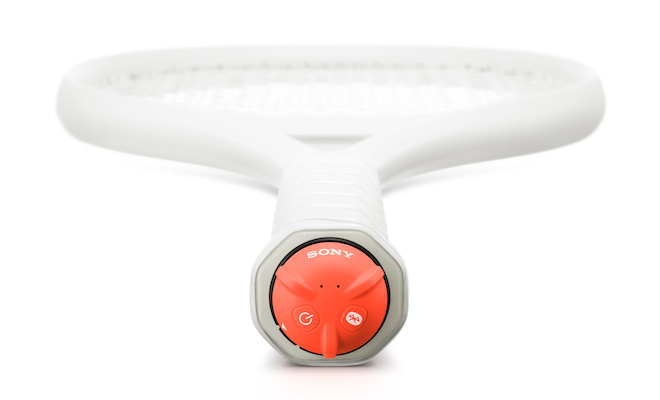 Sony just released the Smart Tennis Sensor (SSE-TN1W), engineered for all levels of tennis players that want to optimize their tennis game and share their performance results. The new sensor takes control to the next level through real-time shot visualizations instantly available on a smartphone or tablet as well as simultaneous displaying of recorded video and shot metrics. The Smart Tennis Sensor will be compatible with select tennis racket models by top manufacturers such as Wilson, Prince and Yonex.

Weighing approximately 8 grams and measuring 31.3mm in diameter, the Smart Tennis Sensor is designed to minimize impact on performance while playing, yet fits securely and discretely at the bottom of the racket. The sensor’s Memory Mode enables up to 12,000 shots of internal storage for quick saving or easy download to a smartphone or tablet. The sensor can be conveniently transferred any time, along with all recorded historical shots between a player’s spare rackets, or to another compatible racket model or brand through a player’s development in the sport.

With an IP65 waterproof/dustproof rating and officially approved by the International Tennis Federation (ITF) for use during competition*, Sony’s Smart Tennis Sensor aligns to play of all levels and intensities. Get more info at http://www.smarttennissensor.sony.net/NA/ or check for compatible rackets,

Price and Availability
The Sony SSE-TN1W Smart Tennis Sensor is available late-May 2015 at Wilson.com and through select Wilson tennis dealers, and sony.com for $199.99 in US and Canada.