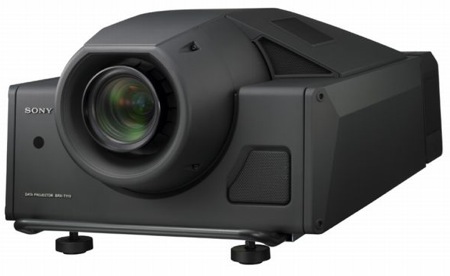 The new T-Series includes the SRX-T110 and SRX-T105, with both new models offering many design elements from their successful SXRD predecessors — the S-Series — including the same 4096 x 2160 resolution. However, the new projectors offer an enhanced contrast ratio of 2,500:1 and higher brightness, 11,000 and 5,500 lumens respectively, thanks to a refined optical block design.

The projectors feature improvements in performance, interface capability, control software and installation capabilities — all without sacrificing the resolution, fill factor, response speed, and other characteristics which has earned SXRD technology critical acclaim.

“There’s a growing need in commercial applications for projectors to have the ability to deliver images at ultra-high resolution while at the same time featuring both the reliability and capability to meet the requirements posed by those specialized applications,” said Andre Floyd, marketing manager for SXRD systems at Sony Electronics. “The new enhancements we’ve made to these fourth-generation projectors are based directly on feedback we have received from the market.”

Additional flexibility has been designed into the Gamma settings in the T-series. A user-defined register is available in addition to 2.2 and 2.6 presets, where the user can set values from 1.8 to 2.59 in steps of 0.01.

With the use of a pre-installed but removable interface board, LKRI-005, the projectors are DVI-enabled with High Bandwidth Digital Content Protection (HDCP), allowing compatibility with PlayStation3 systems and Blu-ray Disc™ players, and other digital high-definition devices. This board, designed specifically for use with the new T-series models, also provides support for 1080/50P, 720/60P and 720/50P content.

Installation Flexibility
New software allows for control of up to four projectors over ethernet from a single PC, which is ideal for multi-projector applications such as dual-projector stereoscopic presentations with 8.8 million pixels per eye or multi-projector training simulators.

For installations where rigging is required, dedicated suspension points have been added to the chassis. Baffling has been added to vents on the projector for installations in light-sensitive environments such as planetariums or in rear-screen configurations. The new models can be tilted as much as 90 degrees, up or down, allowing simpler installation when projection is required on horizontal surfaces, and they allow for independent horizontal and vertical image flip capabilities to support the new mounting options.

An improved “intelligent” cooling system has been developed for the T-series resulting in a noise decrease of between 5-7 dB versus previous versions, and using the optional LKRA-001 exhaust adapter, noise can be reduced by an additional 2 dB.

SXRD 4K Legacy
As with many of Sony’s product lines, the SXRD family provides for continued compatibility with existing accessories. All current peripherals for the SRX-R110/R105/S110/S105 remain compatible with the SRX-T110/T105 models. Lamps and lamp-houses remain the same even as the new models provide improved contrast and brightness. Anyone interested in upgrading their current Sony 4K projector by purchasing a new T-series model can continue to use the lenses and input cards they already have.

With a 92 percent fill ratio and a minuscule inter-pixel gap (0.35 microns), the 4K projectors display incredibly realistic and immersive images, even when projecting content which has a resolution lower than 4K, such as high-definition video.

The SXRD projector’s 4K resolution is derived from its 4096 by 2160 pixel matrix, providing over 8.8 million pixels, and allowing it to deliver more than four times the resolution of today’s high-definition televisions. Sony’s 4K technology is used worldwide for a range of commercial applications such as computer visualization, planetarium and museum exhibition, command and control, simulation, scientific research, education, and defense, as well as for digital cinema.