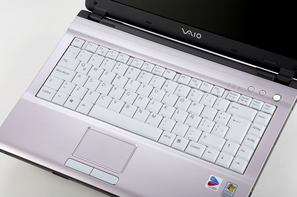 As a prelude to a broader marketing initiative to the growing U.S. Hispanic population, Sony Electronics is introducing a stylish notebook computer that includes a Spanish language operating system and keyboard.

Available in five colors– including Onyx Black, Pearl White, Sky Blue, Jade Green and Raspberry Red — the FJ Series provides the option for Spanish speakers to have the latest mobile notebook computer personalized for their home and work lifestyles.

According to the U.S. Census bureau 31 million U.S. citizens over the age of five speak Spanish at home. Until now Spanish-speaking Americans have had little choice in personal computers. The VAIO FJ Series en Español gives these consumers an additional option, while paving the way for future Sony corporate-wide initiatives and community outreach programs targeting U.S. Hispanics.

Sony’s VAIO FJ Series notebooks are slim, 14.1-inch widescreen PCs that combine portable power and productivity with a sense of style. The built-in camera and microphone helps users to stay in touch with international friends and family with virtual face-to-face conversations, while an onboard DVD+R double layer/DVD+RW drive and XBRITE-ECO™ LCD technology turn it into a mini-movie theatre to watch DVDs at home or on the go.

VAIO FJ en Español notebooks will be available this month at select Sony Style Stores around the country and at www.sony.com/vaioenespanol starting at about $1,400.