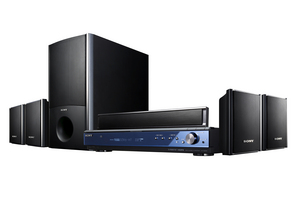 At 250 watts (RMS), the 3.1 channel HT-CT100 unit includes a sound bar and separate subwoofer, which delivers realistic surround sound using Sony’s S-Force PRO Front Surround Sound technology eliminating the need for rear speakers. The system will be available in March for about $300.

Additionally, the new home theater systems offer an updated Portable Audio Enhancer. This improves the clarity and depth of a connected music player by adding information to the audio signal that had been removed during compression.

The HT-7200DH system integrates a single disc DVD/CD player with upscaling to 1080p via HDMI™ when connected to a 1080p-capable HDTV set. There is an HDMI repeater that automatically switches the television to the correct input needed for operation. The integrated AV receiver has three 1080p-capable HDMI inputs for support of high-definition home theater components. An on-screen display simplifies content navigation and device operation. The model will be available in May for about $500.

The HT- DDWG700 unit includes a cradle for iPod players (TDM-iP10) so you can enjoy music through the home theater via a connection to its Digital Media Port. The surround sound system will be available in March for about $200.

The new systems will be available at www.sonystyle.com and Sony Style retail stores nationwide, as well as at military base exchanges and authorized dealers throughout the country.