“SXRD is the next milestone in the evolution of high-definition television and a standard for the ultimate picture performance,” said Randy Waynick, senior vice president of the Home Products Division for Sony Electronics. “If you’re looking for the full power of HDTV, these models deliver like no other.”

At the heart of the models are three new 0.61-inch SXRD panels, making them the world’s smallest – one each for red, green and blue color reproduction – delivering more than 2 million native pixels (1920 x 1080) for a full high-definition picture.

Maximizing the Picture
An “Advanced Iris” combines with the three panels and Sony’s Cinema Black Pro mode to maximize up to 10,000:1 contrast based on overall light levels of the original signal. The result is exceptional brightness and sharp contrast. Additionally, the aperture of the iris shutter has been reduced in size, resulting in more faithfully reproduced blacks.

For greater brightness and improved color reproduction, especially with reds, the new SXRD televisions incorporate a 120-watt high-output lamp, along with a new optical engine.

The KDS-R60XBR1 and KDS-R50XBR1 units will ship in September for about $5,000 and $4,000, respectively through SonyStyle.com, at Sony Style retail stores (www.sonystyle.com/retail) and at authorized dealers nationwide. Pre-orders begin on Aug. 16 at www.sony.com/WEGA-SXRD. 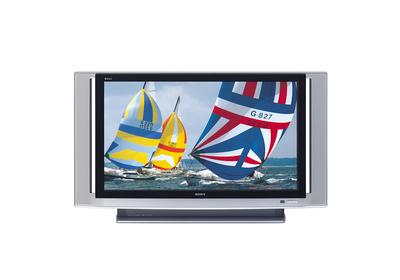