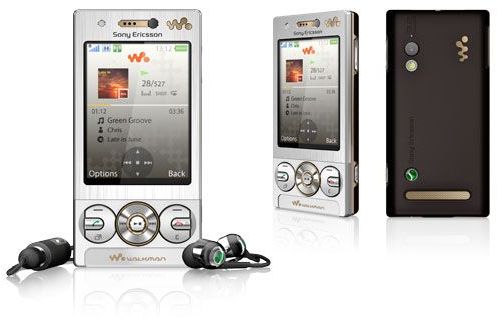 The infamous Walkman range of music orientated mobile phones has just expanded to include the new Sony Ericsson W705, this latest addition takes the very best in features and deisgn from previous models and adds a new technology that could prove to be priceless in the music download world.

The Sony W705 is the first ever Walkman phone to features WiFi technology, this opens up the possibilities of connecting to the internet whilst out and about to download at will new music tracks and complete albums.

On first sight you would be forgiven for thinking you were looking at a pimped-up W910i, the new Sony W705 features a similar slide design however the main exterior when in the closed position resembles more the Sony W880i silver edition, this new handset takes the best from both handsets.

With the introduction of high Wi-Fi connectivity in this mobile phone, Sony Ericsson has really moved one step ahead for bringing a revolution in the mobile industry. This Wi-Fi technology facilitates to achieve high speed internet access almost everywhere whether you are in airport or are enjoying your holidays on an island. Really, this advanced technique has nearly abolished the long distance hassle. To add more, here is Bluetooth technology that aids for moving favorite music videos are other crucial data files among several compatible devices.

Another boon is the introduction of PC synchronization, the support of USB has really made it possible to enjoy the video clips stored in mobile phone on much bigger screen of television with digital clarity. This handset has been truly designed for enriching the audacious and exploratory nature of people by offering Google maps. These are greatly helpful for the exploration of new destinations; these also contain several pre loaded points of interests. So don’t get tensed, if you are going for a safari having this W705 with you. The users can also get these details directly printed on paper by utilizing the option of PictBridge.

For the admirers of photography, this handset is an immaculate alternative due to its superb quality photography options. A 3.2 mega pixel camera with digital zooming up to 3x integrated in the handset contains several photography dedicated options like geo tagging, photo light, photo fix, video recording, picture blogging, video light and photo feeds. All above mentioned options are greatly assisting for the improvement of picture quality being snapped out through integrated camera.

Geo tagging helps in adding up necessary details beneath the picture, while the digital zooming helps to snap the picture more closely and precisely. The option of photo fix is really of worth importance as it makes possible to edit the captured picture by removing all vogue impression like blinking of eye or red eye effect from the picture. The most liked features is video recording along with video sharing and video streaming, people use it for capturing out some special or funniest moments of life for getting in touch with sweet memories.

Next, is the entertainment, the primary feature of this Walkman phone. For elevating amusement function, the features incorporated are motion gaming, 3D games, media player, Walkman Player, video viewing, You Tube and FM radio with RDS feature. For adding mood to the joy several music dedicated options introduced by this mobile phone are TrackID, SenseME, shake control, Clear Bass, Clear stereo, album art and many more.

In short words, this Sony Ericsson W705 Walkman Series Phone has really taken customers to a new level of communication and entertainment level. So whenever going for purchasing mobile phone, opt for this for carrying out all advanced technologies in your pocket.

The Sony Ericsson W705 Walkman phone has been initially released on O2 pay monthly contract deals in the UK, there are further network launches planned for this new music phone on both Orange and T-Mobile over the coming days aswell as a Pay As You Go offering sometime soon.