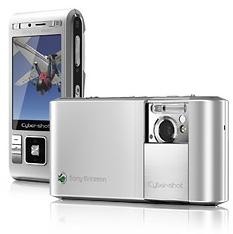 The new C905 range of Cybershot mobile phones has now expanded to include a new colour variant, the Sony Ericsson C905 Silver edition is the latest version of this new 8 megapxiel camera phone to hit UK markets and swells the number of colour schemes availble to four in total.

Originally released in black the Sony C905 was then launched in a new bronze casing alongside an extremely similar gold version called the Inca Gold edition, now this flagship model from Sony Ericsson has been made available in a new sleek silver finish giving the phone a real sense of expense and worth.

The Sony Ericsson C905 mobile phone is the first slide designed handset to carry the Cyber-shot name. It’s packed with premium camera features that are rarely found on mobiles including a world-leading 8.1 megapixel camera.

The Sony Ericsson C905 Silver is a high flyer with a lot to offer. The latest phone in Sony’s Cyber-shot range, the Sony C905 is equipped with an 8.1MP autofocus camera with an endless list of features. Starting with a built-in Xenon and photo flash, the Sony Ericsson C905 Silver includes 16x digital zoom, image stabiliser, red-eye reduction, face detection, BestPic technology, geotagging and picture blogging. Oh, and just for good measure there’s a secondary videocall camera as well.

Plus there’s an anti-shake image stabilizer to help you avoid blurry pictures, along with built-in GPS to help users remember where they took each photo! As you’d expect from Sony Ericsson, this is not just a camera phone. It is also a music player, a radio, a games machine and a web browser, adding WiFi and 3G connectivity to keep you online. But it’s the camera that really stands out. If you’re serious about photography, the Sony Ericsson C905 is an excellent choice.

The Silver Sony C905 also has an accelerometer which comes in handy for automatic rotation of the screen when viewing pictures and if you want to have a family viewing on your TV, then the TV output port is a blessing. The 2.4 inch TFT screen display is of course scratch resistant thanks to its high quality mineral glass cover. When it comes to memory, the Sony Ericsson C905 proudly boasts 160MB user memory plus optional 2GB expansion.

Anything but lacking in its abilities, the Sony Ericsson C905 offers Quad Band GSM with GPRS and EDGE technology and Tri Band UMTS (3G) and HSDPA support plus WiFi capabilities with DLNA support.

Multimedia features are overflowing on this phone with an MP3 player, FM Radio with RDS support and built-in GPS with A-GPS functionality. Identify song titles and artists with TrackID music recognition software onboard, download music and games direct to your phone with PlayNow and share images and files with bluetooth wireless that comes with A2DP stereo support. With video streaming you can watch live video’s on your mobile phone and download onto your pc using a USB connection.

Initially available on O2 pay monthly contract deals it is expected that the Sony C905 Silver edition will be made available on further UK networks in the very near futurem with four difefrent colour schemes to choose from the C905 is an attractive proposal for any mobile phone enthusiast especially those who demand the highest quality from their wireless devices.

Ubergizmo11 years ago
Advertisement. Scroll to continue reading.
You Are Here