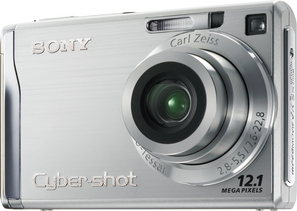 At the top of the line is the DSC-W200 camera, the most compact 12-megapixel camera in the industry. It is followed by the 8-megapixel DSC-W90 unit and the 7.2-megapixel DSC-W80 model. All sport Carl Zeiss 3x optical zoom lenses; traditional, eye-level viewfinders; and large, 2.5-inch LCD screens wrapped in sleek metal bodies. 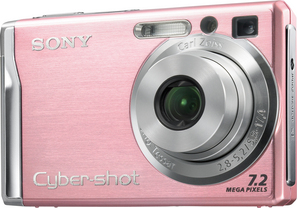 Seeing Is Believing in High Definition

“As HDTV becomes more pervasive in American households, it is only natural to want to view all of your content in high definition, including photos,” said Phil Lubell, director for digital cameras at Sony Electronics. “Our new cameras support a shift in customer behavior — from viewing digital photos on a PC to having a full entertainment experience in the living room.”

The cameras can also be used with the new Sony CSS-HD1 high-definition Cyber-shot Station, which comes with the component cable. You can connect the cameras to the station just one time, and it will also work as a charger for the camera.

This new printer lets you print photos on the spot in about 45 seconds. Designed to complement any living room, it comes in elegant black and can be positioned horizontally or vertically.

All of the new cameras feature a built-in slide show function. You can play back your images with pans, fades and wipe transitions set to your choice of music clips.

With these cameras, you can be more confident in your ability to take properly-exposed, sharp photos. All incorporate Sony’s new face detection technology, which can identify up to eight faces in the camera’s LCD frame, and automatically adjust white balance and flash as well as focus and exposure.

If you decide that the flower arrangement should be in the picture as well, the new multi-point auto focus (AF) feature can automatically determine the right focus of up to nine points in the camera frame, rather than focusing on what is in the middle of the frame.

Edit On The Fly

The new W-series models incorporate selectable in-camera editing functions that can save you from hours of post-editing time at the computer. Equipped with Sony’s Dynamic Range Optimizer, the cameras can analyze captured image data and instantly determine the best exposure and tonality of each picture before JPEG compression.

Other helpful in-camera functions include red-eye correction and retouching effects. You can create artistic photos with the soft edge filter that emphasizes a focused subject by blurring the background. The partial color filter highlights the subject by letting it remain in color while making the background black-and-white. Photos can be enhanced with the cross filter that adds four-point star effects to the light in an image, and enlivened with the fish-eye filter for an amusing fishbowl effect.

Shoot At The Speed of Life

The Bionz engine also helps to speed up the cameras’ response times and extend battery life. On a full chare, the W90 camera can shoot up to 350 shots, the W80 model up to 340 shots and the W200 unit up to 270 shots. 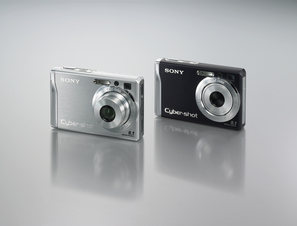 The silver W200 camera will ship in May for about $400. The W90 camera will be available in March for about $300 in black and silver. The W80 model will be hit stores in March for about $250 in pink, white, black and silver. Options will include batteries, travel chargers, lenses, filters, sports packs and cases. The DSC-W80HDPR kit will be available for about $400 in April. All products can be purchased online at sonystyle.com, at Sony Style retail stores (www.sonystyle.com/retail), and at authorized dealers nationwide. Pre-orders begin on Feb. 28 at www.sonystyle.com/newcameras.