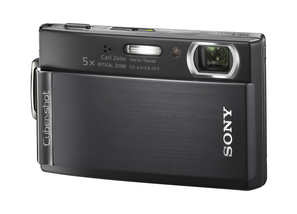 Sony is taking the wraps off a new 10.1-megapixel Cyber-shot DSC-T300 digital camera, featuring a stylish, ultra-compact design and intelligent functionality to help reduce the risk of taking a bad photo.

The new model incorporates Sony’s new intelligent scene recognition (iSCN), a technology that allows the camera to analyze shooting conditions and automatically select the optimal settings for the best photo results. In iSCN mode, the camera can automatically detect up to five scenes, and choose the best setting for the situation. 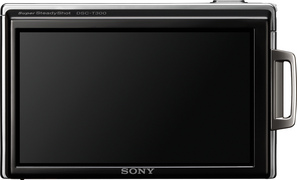 More Intelligent Features
The camera’s updated face detection technology can differentiate between the faces of children and adults. Simply select “child priority” or “adult priority,” and the camera will automatically detect up to eight faces in the camera frame, adjusting focus, exposure, white balance and flash for the subjects that matter most.

Lubell said Sony has applied a similar advancement to its “smile shutter” technology, an intelligent camera function that captures smiles automatically by searching for facial movements related to smiles and laughs. Capable of detecting multiple smiles instead of only one, users can apply “child priority” or “adult priority” in smile shutter mode to capture photos only when the intended subjects smile.

New controls on this model include: semi-manual focus, which lets the user set the focus range; improved auto focusing system to cover macro ranges in auto mode; and the addition of Sony’s D-Range Optimizer Plus mode that uses a higher image correction algorithm to retrieve more picture detail in bright highlights and dark shadows caused by high-contrast shooting.

Organize and Playback Images in Style
As storage capacities on Memory StickDuo™ and Memory Stick PRO Duo media cards increase, Lubell said, options for easily organizing, accessing and playing back photos is more of a priority. The new camera’s internal database allows for advanced filtering to later search for photos by date and smile. Images can be viewed in chronological order or displayed in a helpful calendar view, and organized in the camera’s “favorites” folder.

To view your images in stunning 1080 HD resolution slide shows, just connect the DSC-T300 camera to a compatible HDTV set. Slide show includes your choice of background music, including up to eight tracks (a total of five minutes in length) you can upload via USB, and use multiple tracks to create longer slideshows set to music.

The DSC-T300 camera replaces the DSC-T200 model. It will be available in red, black and silver in March for about $400. The camera, as well as a range of accessories, can be purchased online at sonystyle.com, at Sony Style retail stores (www.sonystyle.com/retail ), at military base exchanges, and at authorized dealers nationwide. Pre-orders begin on Jan. 31 at www.sonystyle.com.