These are the first Cyber-shot cameras with an in-camera Backlight Correction High Dynamic Range (HDR) feature for managing difficult lighting situations and TransferJet™ wireless technology for sharing, storing and viewing images. The HX5V model is also the world’s first still camera to include GPS + Compass and Optical SteadyShot™ with Active Mode technologies.

In addition to its cameras, Sony introduced three other devices with TransferJet technology at CES, including a Sony Memory Stick memory card (model MS-JX8G) with a wireless transmitter/receiver, a Sony TransferJet Station (model TJS-1) and a VAIO F Series notebook.

“Adding to the outstanding low-light performance and impressive Sweep Panorama feature, we are providing high-quality movies with full HD video, stereo sound recording when capturing movies on the go and an in-camera HDR solution for capturing high-contrast scenery. Sony can provide these solutions because of its expertise with other imaging products including Handycam camcorders and DSLR cameras,” said Kelly Davis, director of the Digital Imaging business at Sony Electronics. “Our goal is not only to make it easy for consumers to get the best shot–still or video–but also to have the best sharing experience.”

High-Quality Stills and Videos
With the AVCHD format, these new cameras record movies in 1920 x 1080 full HD resolution at 60i in 17Mbps. The AVCHD format captures a high degree of detail and smooth movement, and when footage is burned to disc, it can be played back on your HDTV using most Blu-ray Disc™ players, Sony PlayStation3 systems and compatible Blu-ray Disc enabled PCs. In addition to the supplied PMB software for Windows users, it is also possible to edit recorded AVCHD file using iMovie for Macintosh users. 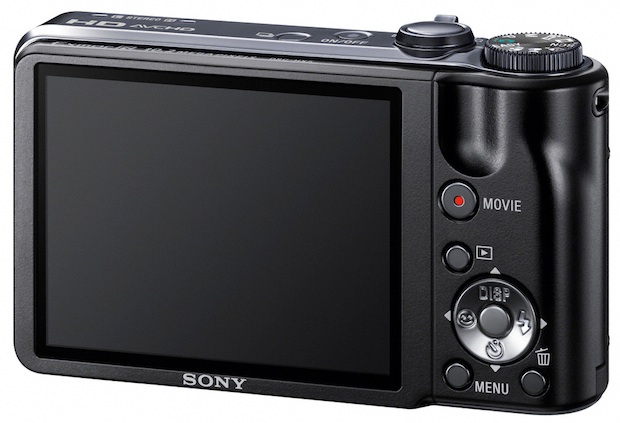 HDR offers a solution for strong backlight situations which typically result in either dark shadows in the foreground or a washed out background. Sony’s “Exmor R” sensor and BIONZ™ processor help to correct these issues.

Impressive Panoramas
The HX5V and TX7 cameras have an Intelligent Sweep Panorama™ feature that captures wide landscapes or tall buildings in one easy “press and sweep” motion. Due to their “Exmor R” CMOS sensor technology, they can take up to 270 and 258-degree panorama shots, respectively, horizontally or vertically with an image size of 7,152 x 1,080 (horizontal wide panorama mode). In addition, these cameras’ Intelligent Sweep Panorama feature, which is comprised of up to 100 separate captures, detects faces and subject motion and intelligently adjusts the width of each picture while stitching them together, resulting in natural looking panoramic photos.

Relive the Experience
Ideal for travelers who take hundreds of photos, the in-camera GPS + Compass feature on the HX5V camera makes it easy to store and share the location and direction of where photos were taken.

With social networking sites becoming more popular, people want to share more details of their experiences. The GPS + Compass feature provides a fun new way to share where they were — beyond the location. Using the free online satellite imagery application, Google Earth™ mapping service, users can view the images from a bird’s eye view or from the direction in which the photo was taken. The GPS function automatically adjusts the camera’s internal clock by selecting the travelling area, without the hassle of setting the time manually.

A Wireless Way of Sharing, Storing and Viewing
TransferJet technology, which was developed by Sony and is supported by a consortium of other companies, allows you to transfer files between two TransferJet-enabled devices just by bringing the TransferJet marks on each product within one inch of each other without the hassle of hunting for cables or the complication of pairing. To transfer photos, TransferJet-enabled still cameras must each utilize the TransferJet Memory Stick media (sold separately).

TransferJet technology is perfect for sharing on the go. You can select up to 10 pictures and transfer them from camera to camera. For storing images, you can place the HX5V or TX7 cameras on the lower left-hand corner of the VAIO F Series notebook and import photos. For sharing at home on devices which do not have the technology, you can connect the TransferJet Station to devices with a type-A USB port, including your TV, digital photo frame or PlayStation3.

Designed for Technology Enthusiasts
With the most innovative digital imaging technologies, the HX5V camera is ideal for everyone from travelers to party-goers. The multi-occasion camera features a 10 megapixel “Exmor R” sensor, a 3-inch LCD screen (measured diagonally) and a 10x optical zoom with wide-angle 25mm-250mm equivalent high-quality G lens allowing easy group shots and close ups when on the move.

In addition to its AVCHD video capability, the HX5V camera has Optical SteadyShot™ image stabilization with Active Mode, which lets you capture moving subjects such as kids walking or running. It allows a moveable lens element to shift with greater range of motion–10 times the range of the Optical Steady Shot™ feature at wide end in standard mode–during camera shake. The feature reduces camera shake so users can shoot smoother movie footage on the move. The cameras also have an HDMI™ output adapter for easily connecting to an HDTV for viewing pictures and movies (HDMI cable required).

Powerful and Stylish
For those seeking a sleek, compact camera, the 10MP TX7 model is just under an inch thin and is slim enough to slip into a pocket or purse. The 3.5-inch (measured diagonally) high resolution (921K) touch LCD screen offers easy image scroll by simply swiping your finger across the display. The camera’s high-performance Carl Zeiss Vario-Tessar 4x optical wide angle 25mm-100mm equivalent zoom lens brings distant subjects closer and Close Focus snaps close-ups in just under a half an inch from the subject.

The DSC-TX7 camera is also compatible with the Party-shot™ (model IPT-DS1) automatic photographer, which pans, tilts, zooms and adjusts composition to capture spontaneous images. Additionally, an embedded touch sensor located on the front edge illuminates when the TX7 camera is attached. By touching the sensor, the camera goes into the “On-demand shot” mode, which allows users to select the shutter timing without losing the advantage of Party-shot’s built-in intelligence. 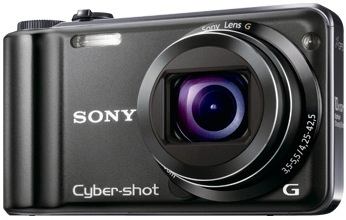 To give customers greater choice and enhance the overall customer experience, the TX7 and HX5V cameras feature a memory card slot compatible with both Memory Stick (PRO Duo™) and SD/SDHC formats. Sony is also expanding its industry leading line of consumer media with the addition of SD/SDHC memory cards.

A New Way to Share Photos and Videos Online
These models include Picture Motion Browser (“PMB”) software for viewing, editing, organizing and uploading images to many major video and photo sharing Web sites.

This spring, Sony will launch a new service and a new integration with Facebook allowing users to easily and quickly share their photos and videos privately with friends and family. The service and the integration will be available as a downloadable update to the “PMB” and “PMB portable” software applications that are embedded with bloggie™ and Cyber-shot cameras and bundled with Handycam camcorders, bloggie cameras, Cyber-Shot cameras and α cameras. The Facebook integration complements the existing sharing capability with such sites as YouTube™ and Picasa™ Web Albums.

WIRED11 years ago
You Are Here