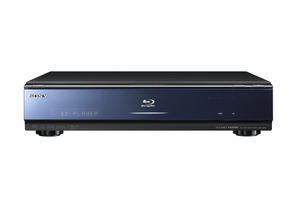 “Consumer support of Sony’s Blu-ray Disc products has been outstanding and the new models are targeted to satisfy the demand of those who crave an even greater level of entertainment and performance,” said Chris Fawcett, vice president of marketing for Sony Electronics’ Home Product Division. “From the enthusiast level of our ES line down to the entry-level models, our commitment to the finest quality video and sound delivered by the BD format has never been stronger.”

The BDP-S2000ES and BDP-S500 units both offer 7.1 channel Dolby TrueHD, Dolby Digital Plus, and DTS-HD High Resolution Audio bitstream output, which is optional specification of HDMI ver1.3. This makes them a perfect match for the recently announced STR-DA5300ES and STR-DA4300ES AV receivers, which also feature the ability to decode the advanced audio codecs. The new BD players also feature Dolby TrueHD, along with the Dolby Digital Plus and DTS-HD High Resolution Audio decoding function via HDMI, to offer a better sound experience with existing receivers.

The Blu-ray Disc players feature 1080/60p and 24p True Cinema output. They are compatible with most standard DVDs and feature 1080p upscaling through HDMI to capable HDTV sets, improving the picture performance of existing DVD libraries.

Both the BDP-S2000ES and BDP-S500 players incorporate BRAVIA TheatreSync™ through HDMI. This allows for integrated operation with a compatible BRAVIA flat-panel LCD HDTV sets and audio/video receivers. With the touch of a button, you can easily power on and synch the inputs of compatible Sony AV devices connected to the players via HDMI for hassle-free enjoyment of high-definition Blu-ray Discs.

The new BDP-S2000ES and BDP-S500 players will be available this fall for about $1,300 and $700, respectively. They will be offered at Sony Style stores, online at sonystyle.com, at military base exchanges, and at authorized retailers nationwide.