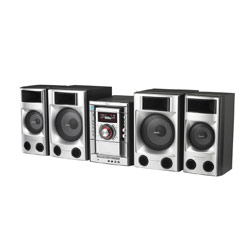 Sony today introduced its Muteki (pronounced moo-techy) line of audio shelf systems, which are perfect for getting any party started.

The new systems offer an unbeatable combination of powerful sound and features that make them ideal for celebrations calling for a DJ, Karaoke and dancing with optional disco lighting.

Created with the Latin culture in mind, Muteki product literature packed in the box comes in Spanish and English. It is also a festive companion for Hispanic fiestas like Quinceaneras and Cinco de Mayo.

With a separate light controller, listeners can sync the party lighting with the music so the lights pulsate with the beat. The most feature-packed Muteki model offers 5.1 channel surround sound and connects to TVs for karaoke fun. For DJs, there are numerous settings to control the music and help set the mood.

With 880 watts, the LBT-ZX80D system includes a special Karaoke feature that makes a game out of singing. It scores singers based on their sense of timing and rhythm.

With a 3-DVD player and support for DivX and MP3 file formats, this system is perfect for listening to music or connecting to your TV and entertaining in your living room. It supports Dolby Digital and Dolby Pro Logic II as well as Digital Cinema Sound™ to obtain the best sound quality while listening to music or watching movies.

Because of its powerful sound system, this model has an air intake that increases the velocity of the air through the main body to improve performance, prevent dust build-up and help ventilation. The Power Illuminator light indicator is found around volume control and flashes, synchronized to the beat in several different patterns. The system supports dts Decoding, which is a surround sound format found in some DVDs.

With 720 watts of power, a 5-disc CD changer with MP3 playback capability, the LBT-ZX9 system has added functionality for getting even better sound quality and control. The system comes with four speakers, so two speakers can be placed in the front of the room and two can be placed in the back to achieve a surround sound effect. A double tweeter is mounted on all four speakers for added sound quality.

Do It Yourself DJ

It’s easy to DJ a party with Sony’s LBT-ZX9 and LBT-ZX80D systems (720 and 880 watt systems, respectively) that come with the DJ Style Flash function with Interval Control, which is a jog dial that cuts sound periodically and controls the speed of the sound effect like a professional DJ. Sony’s X-Trance technology controls sound effects and mixing beats. The three levels of X-Trance control include:

The LBT-ZX6 model has 560 watts of power and a three-way main speaker system. The system has a 5-disc CD changer and a mic input with volume control, so it’s easy to sing along to your favorite songs. To get your desired sound, the system has a 5-band spectrum analyzer and a Variable Attenuation Control System that manages the volume automatically to prevent sound distortion.

For the best gaming environment, the LBT-ZX6 model includes the Game Sync feature, which offers mixing with front audio/video inputs. Additionally, the system offers a Personal EQ File that remembers your customized equalizer setting, a CD Synchro Recording function that lets users record CD to cassette automatically and a Remote Commander remote control for controlling your music at a distance.

With 520 watts of power, the MHC-LX10000 system produces a booming, high-impact sound through two-way front speakers. For changing music without interrupting the party, a three disc CD changer with Sony’s Play Exchange allows users to change two CDs while playing a third.