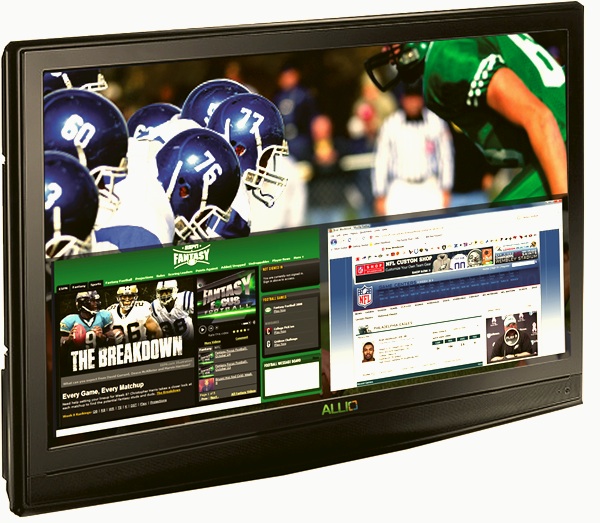 The latest Allio HDTV / PC models are manufactured using the same clear, high-quality 42″ 1080p and 32″ 720p displays as the standard Allio models and include the same selection of inputs and outputs as the original, at a lower price point. Allio Lite extends the product line by integrating an Intel Atom-based computer and DVD-CD player/writer to deliver a simple, low-cost converged multimedia experience that brings a whole new generation in HD TV and Internet entertainment to the living room!

Since its release in 2008, Intel Atom technology has been associated with light computing products like netbooks and nettops, and has been favored for its low-power requirements, low-heat and low-cost. While the Atom powers Allio Lite, there is plenty of muscle for integrated TV-PC functions. Allio Lite features the Intel dual-core Atom 330 CPU with hyper-threading. The most powerful of the three Atom processors, this “Dual Diamondville” 1.6 GHz model delivers an exceptional media experience for the price. Unlike most light-computing products, Allio Lite HDTV / PC also features Windows Vista Home Premium, a DVD super-multi optical drive, as well as plenty of storage (250MB HDD) and memory (2GB RAM).

The Allio Lite TV-PC brings the incredible experience of converged high-definition TV and internet content experience together for the first time in large screen LCD clarity. Users can easily check email while watching a television program, enjoy a movie on DVD while working on a spreadsheet, or stream high-definition content to the large screen with free sites like Hulu or TidalTV while updating a Facebook page.

Along with the standard Allio models, a working prototype of Allio Lite was featured in Las Vegas at the 2009 CES expo earlier this month to rave reviews. Heading into the consumer electronics industry’s biggest show, ChannelWeb listed Allio at number two on its “25 Hot Products to See at CES.” After seeing Allio first-hand at the show, TopTenREVIEWS ranked Allio at #4 on their Top Ten of CES 2009 list, calling Allio, “frankly the best integration we’ve seen of HDTV and PC.”

“We have been overwhelmed by the positive reception and accolades that Allio and Allio Lite HDTV/PC received at the 2009 Consumer Electronics show,” said Tre’ Cates, President and CEO of Silicon Mountain Holdings, Allio’s parent company. “The response at CES was clear — converged entertainment is something that the consumer wants, and Allio Lite with its simple feature set and appealing prices really caused a stir at the show. Early adopters normally pay a premium for convergence. Allio stands alone as the market leader in this category and Allio Lite represents value during the introductory phase of digital convergence.”

While Allio is an entirely new breed of converged entertainment device, the company behind this product is not a startup. Allio and Allio Lite are designed and assembled in the US by Silicon Mountain, a publicly-traded company with over 14 years experience in the computer industry manufacturing high-performance servers, gaming PCs and digital storage.

The Allio Lite integrated high-definition LCD HDTV, DVD player and PC is available for sale now direct at alliotv.com, or from resellers like Amazon, TigerDirect and Visionman.