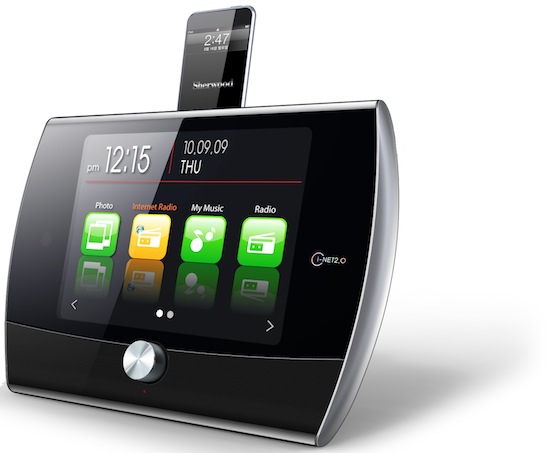 At first glance, the iNet-2.0 appears to be just a digital photo frame or clock, but it houses a powerful Internet music player and iPod dock. Equally at home on a table, desk, or even bedside, the iNet-2.0 digital media player is a highly versatile and useful entertainment delivery device, combining an Internet radio, iPod/iPhone dock and a 8-inch digital photo frame in a sleek, attractive package.

“The iNet-2.0 is a very cool high-tech device. With its large display and alarm function, it’s the ultimate connected alarm clock,” said Jeffrey Hipps, Sherwood’s Sr. VP for Marketing and Product Development. “Whether you’re listening to streaming music or playback from your iPod or phone, it’s the perfect desktop companion, and it’s great for starting and ending your day with music.”

Connecting easily through a wired or wireless connection to the Internet, the iNet-2.0 receives streaming stations worldwide. On demand Audio playback is also available through Rhapsody and Napster services. Its built-in stereo speakers are driven by an internal 10 watts per channel amplifier.

With Apple’s “Made for iPhone” and “Made for iPod” certification, the iNet-2.0 provides playback from both Apple devices through its built-in dock. The iNet-2.0 can play back MP3, Windows Media, AAC+ and RealAUDIO audio files.

When not being used to access media, the iNet-2.0’s 8-inch panel can be used to display photos, turning the device into a sleek digital photo frame. 1 Gigabyte of internal storage can be used for photos and media storage, and inputs include a USB Host version 1.1 and a SD/SDHC/MC card slot.