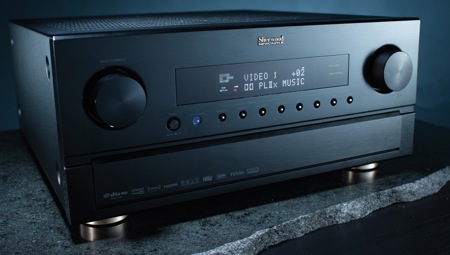 This flagship receiver in the high-performance Sherwood Newcastle line-up, winner of the Innovations 2008 award at this year’s Consumer Electronics Show, delivers 100 watts RMS per channel to 7 channels, provides lossless audio decoding for Blu-Ray and HD-DVD discs via dual Ti 32-bit DSP chips and is HDMI 1.3 enabled with 1080p video scaling via its Silicon Optix Reon processor.

But the reasons that the R-972 has been described as a “game changer” among A/V components is that it is the first consumer product to feature the $13,000 Trinnov Optimizer Room Correction system. (More on that below, after we finish the basic overview).

For video, the receiver has four HDMI 1.3 inputs and 7 analog video inputs, and is able to convert legacy analog video to HDMI. It can scale all video to resolutions up to 1080p, is capable of 36-bit “Deep Color” and provides a simple, one-wire hook-up to advanced video displays. It comes with a dual-mode (RF + IR) remote control, 12-volt triggers and can also be controlled from its RS-232 communications port.

The R-972 is fully equipped for whole-house audio/video. It supports 3-Zone operation with independent preamp level audio and video available for Zone 2 with audio only, available in Zone 3. The R-972 can use the rear-center surround amplifiers to fully power the speakers for Zone 2 or it can be configured in Room 2 Automatic mode. When in Automatic, the receiver changes from 7.1 operation to 5.1 plus stereo (for Zone 2) when required, preserving the complete presentation in the main room.

The Trinnov Optimizer: A $13,000 professional system in the home!
Described by audio professionals as “one of the most significant audible enhancements we’ve ever encountered” and a “new benchmark,” the R-972 with the Trinnov Optimizer performs like no other equalization system ever before. This “game changer” product brings the technology found in 20th Century Fox’s mix rooms and other professional facilities around the world into the home for the very first time.

Conventional equalization, especially in home systems, has always been limited in its ability to improve acoustical performance. Even the latest advanced room correction systems are able only to compensate for deficiencies and errors in loudspeaker frequency response on a speaker-by-speaker basis. And at their best, these systems are unable to do anything to recreate the soundfield of the original performance or sound mix.

Like conventional equalizers, the Trinnov system flattens the frequency response of the system, providing an immediate sonic improvement. But the Optimizer goes far beyond, with an ability to adjust level, phase and time that gives users an unprecedented ability to control the soundfield. It can actually compensate for less-than-ideal speaker location and room boundaries in a way never possible before. It can literally re-position the acoustic location of each channel electronically, so that the acoustic images of a recording are correctly positioned.

This also means that a center channel image can be positioned where it belongs: at screen center, even when the actual center channel speaker is located below the screen. In fact, the Optimizer effectively creates a 360° acoustical space enveloping the listeners, with correct acoustical imaging, regardless of the location of the speakers.

At setup, using a special four-microphone acoustic probe, the Optimizer measures the system, including the physical location of each speaker and its frequency response. It then determines the necessary corrections and applies the appropriate filters to accomplish the desired correction.

Then the user can take advantage of perhaps the most intriguing aspect of the Optimizer — the ability to produce in the listening room the original acoustic waveforms at the location where the mixing engineer created the final audio mix. This is the Holy Grail of audio reproduction, but how is it possible?

The Optimizer is able to do this because of professional audio practices that are used throughout the world for multichannel mixing. Film mix facilities, whether small room or large dubbing stages, tend to configure their speakers to standard listening angles relative to the mixer’s position. The Optimizer is configured for optimum surround playback in the home, based on Trinnov’s research of these mixing practices, allowing it to deliver precise acoustical imaging per the original soundtrack mix.

Simply select the SMPTE Cinema setting on playback, and the Optimizer will map the sound to the correct channel locations, in any listening room, producing the sound heard by the mixer when the mix was created! For multichannel music, a standard called the ITU Standard for Surround Music specifies speaker angles for optimum music reproduction, and the Optimizer gives users this an ITU Surround playback setting for the best possible surround music.

The Optimizer can even move the entire soundfield laterally if needed, extremely useful in rooms where the speakers are not arranged symmetrically around the TV. Let’s say the display is near a corner, not located between the left and right front speakers because of a fireplace. In this room, the soundfield can be effectively rotated so the center channel sound comes from the screen, with the other channels coming from the correct locations! Three separate sound stage orientations can be stored, allow listeners to switch back to a normal soundstage from the left and right speakers for two-channel music.

Within each of the spatial options, users can tune the response of their system to one of several target response curves. Any curve can be assigned to any input, allowing listeners to easily change system tuning for playback of each source according to individual preference (different settings for music than for film, for example). These choices include “Natural”, very useful for music, that provides a +2 dB bump on all channels below 100 Hz and a gentle roll off above 9 kHz; “Flat”, perhaps more useful for studios than homes; “Front” for listeners with full-range left and right speakers that want the Optimizer bypassed for two-channel music, and “Bass”, which operates on all channels only below 300 Hz.

The result is a level of clarity and spatial accuracy rarely if ever heard in a home environment, with a 360° soundfield and sharp imaging in both the front and the back of the room. Listeners the can hear “into the mix,” and there is an uncanny, distinctive sense of “rightness” to the sound that makes listening effortless and non-fatiguing.

How It Works
The advanced mathematicians and acousticians that developed the Trinnov Optimizer set out to recreate the 3-dimensional soundfield of the original performance. In this endeavor, accurate channel-by-channel frequency response is only a starting point. Trinnov’s task also required the ability to accurately measure and then relocate the apparent sound source until it was identical to the original. 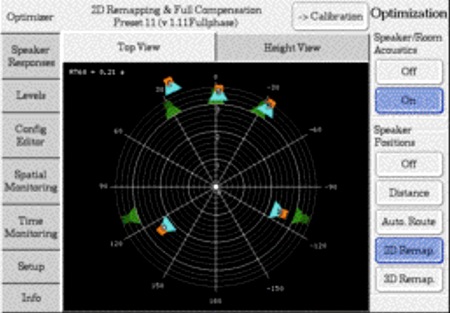 Using an Acoustic Probe with four microphone capsules, the system measures the response of each speaker, the room modes, and the physical location of each speaker in 3 dimensions, with measured speaker distance accurate to + 1 centimeter, and speaker elevation and azimuth accurate to + 2 degrees!

Then the Optimizer calculates appropriate playback filters and uses the calculated digital IIR and FIR filters to optimize both speaker response and speaker placement.

Once the R-972 has made its system measurements, the system will document the changes it makes, along with speaker positions, and users can write stored performance data to the R-972’s USB jack and even print it. Users can upload their stored data to the Trinnov website and print before-and-after graphs of their system. It’s even possible to download new target curves, allowing users to match the sound of their system to alternate setups and to match specific playback material.

Big Picture Big Sound11 years ago
You Are Here