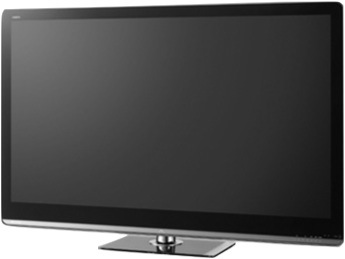 “As a pioneer in the LCD industry, Sharp continues to advance the technology, introducing it’s first LED-backlight LCD TV on the market less than two years ago and paving the way for larger screen sizes, thin designs and Internet connectivity,” said Mikio Katayama, president and chief operating officer, Sharp Corporation. “We have changed the way an LCD TV produces an image with the new four primary color technology, allowing us to broaden the visual experience and immerse consumers in a new world of color.”

Four Primary Color Technology
This four-primary-color display employs a four color filter, for the first time in the industry, that adds the color Y (yellow) to the three colors of R (red), G (green), and B (blue). This combination expands the color gamut, faithfully rendering nearly all colors that can be discerned with the unaided human eye. Four primary color technology enables the display to reproduce colors that have been difficult to portray using conventional LCD displays, such as the golden yellow color of brass instruments.

Continuing Sharp’s history of innovation and originality, the new AQUOS LEDs offer a stunning new contemporary design that pushes the envelope for flat-screen television artistry. At only 1.6-inches thin, the full-front panel glass (on the LE920 and LE820 series) extends to meet the slim border for a subtle edge that befits the elegance of a modern home theater.

These advanced AQUOS LED LCD TVs also include Sharp’s newest version of AQUOS Net, which delivers streaming video with Netflix. AQUOS Net gives users instant access to customized Web-based content as well as AQUOS Advantage Live real-time customer support. The new AQUOS LED LCD TV product lines are all compliant with ENERGY STAR Version 4.0 standards which become effective in May 2010 and are equipped with Sharp’s OPC function that automatically adjusts the unit’s brightness based on the lighting of the room.