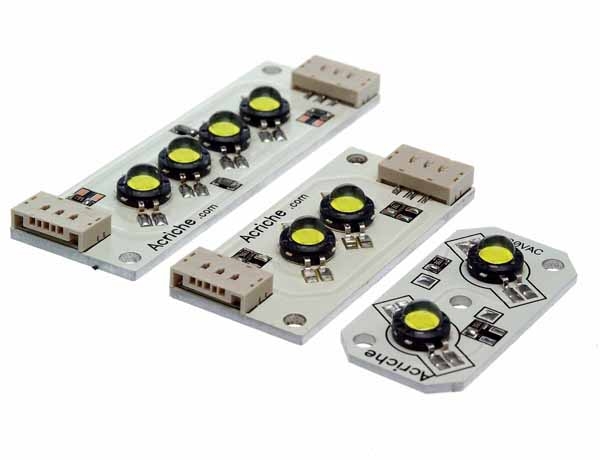 Seoul, Korea (November 16, 2006) — Seoul Semiconductor [KOSDAQ 046890], the country’s leading LED producer, announced today that it had succeeded in mass producing its semiconductor lighting source Acriche, which can be directly connected to 110 volt or 220 volt AC outlets using a simple circuit, eliminating the need for a DC converter. The launch was announced simultaneously in five regions: Korea, U.S., Germany, Japan, and Hong Kong.

As conventional LED products can only work with DC power in AC outlets, it was previously impossible for consumers to use LED products with AC light bulb outlets without using a converter.

“This latest technological breakthrough was not expected by the LED industry,” said Lee Jung-Hoon, CEO of Seoul Semiconductor. “Now that mass production of semiconductor lighting for AC outlets is possible, LED applications are no longer limited to cell phones, computers or cars, but can expand to general lighting applications as well.”

Acriche offers improved power efficiency compared to incandescent and halogen lamps, and outpaces fluorescent lamps in terms of life span, power usage, and convenience.1) Seoul Semiconductor is planning to improve Acriche’s brightness from current 40 lm/w to 80 lm/w by 4Q 2007 and to 120 lm/w by 4Q 2008.

Furthermore, Acriche can also serve to help maintain health and express one’s personality. Using different wavelengths, Acriche can be used for various purposes: a bright light for studying, a warm light for winter, a cooler light for summer, a night-light for sleeping, and so on.

Acriche is also expected to help the environment, as it requires less electricity to operate. For example, if Acriche replaces all the lights in Korea by 2010, the electricity savings would reach 60 billion kWh, which is equivalent to a nuclear power plant’s output, saving 6 million tons of CO2 emission a year. Also, Acriche is environmentally friendly, as it does not contain environmentally harmful substances such as mercury, nitrogen or lead like other conventional lights.

The marketability of Acriche is proven. Even before today’s announcement, a recent report from Display Asia declared that LED is rapidly replacing current light sources. Seoul Semiconductor believes that the development of Acriche has accelerated this scenario. Acriche sales are expected to reach 20 billion Korean won by 2007, 100 billion in 2008 and 300 billion in 2009.

1): Comparison by lighting source chart is available at http://www.marketwire.com/mw/release_html_b1?release_id=184915