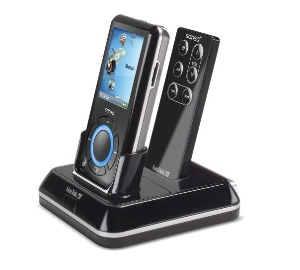 Producing big sound from a small device, the new Sansa™ Base Station from SanDisk Corporation (NASDAQ:SNDK) enables a Sansa MP3 player to become a digital jukebox and play hours of music through a home stereo system or externally-powered PC speaker set. This handy accessory, which also doubles as a docking station for recharging batteries and transferring content to and from a personal computer, was announced at IFA, where SanDisk is demonstrating its products through Sept. 6 at Booth 103 in Hall 2.1 of Messe Berlin.

The SanDisk Sansa Base Station supports the SanDisk e200 series of MP3 players, as well as the new c200 series that is being shown here for the first time. The device allows users to dock a player, connect to and play audio content through an external entertainment system instead of a headphone, operate the player with a remote control, automatically charge the internal batteries of the c200 and e200 players, and transfer data between the player and a PC.

“This is the ‘must-have’ accessory for Sansa owners because it provides a dedicated home for your player,” said Matthijs Hutten, product marketing manager for SanDisk accessories. “With the Sansa Base Station always charged, you can extend the usage of your Sansa player into your living room, enjoy your favorite digital music on your home audio system and control your player wirelessly with the compact infrared remote. Or, you can hook up the Sansa Base Station to a PC and easily transfer music between the computer and your Sansa player.”

Bearing a suggested retail price of $69.99, the Sansa Base Station is expected to be available from retailers in the U.S. and Europe by October.

SanDisk is the original inventor of flash storage cards and is the world’s largest supplier of flash data storage card products, using its patented, high-density flash memory and controller technology. SanDisk is headquartered in Milpitas, Calif., and has operations worldwide, with more than half its sales outside the U.S.