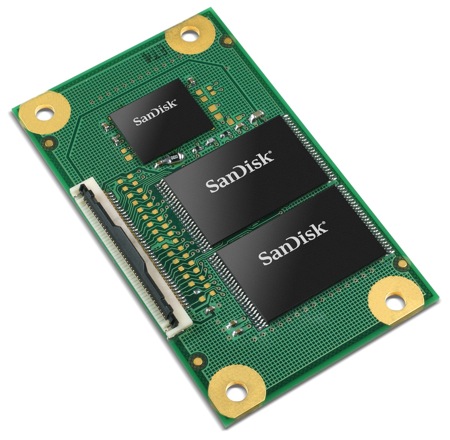 SanDisk Corporation (NASDAQ:SNDK) today introduced a line of flash memory-based solid-state drives (SSDs) that are designed for an emerging new category of portable consumer electronics – called Ultra Low-Cost PCs (ULCPC) or “netbooks” – that allow users to have an enhanced experience while easily surfing the Internet using wireless communication. The SanDisk pSSD™ (Parallel ATA solid state drive) eliminates the need for a hard disk drive and can store both the operating system and application data for these new devices.

A pioneer in developing SSDs for laptop computers, tablet PCs and blade servers, SanDisk is making the new SSD modules available in 4-, 8- and 16-gigabyte (GB)(1) capacities, with a streaming read speed of 39 megabytes per second (MB/s)(2) and a streaming write performance of 17MB/s.(2) Supporting both Linux and Microsoft Windows XP operating systems, SanDisk pSSD solid state drives are being shown this week at Computex Taipei, where SanDisk is exhibiting at Booth M320 in Nangang Exhibition Hall.

SanDisk’s pSSD solid state drives, which are expected to be available starting in August, are built using the company’s reliable Multi-Level Cell (MLC) and Single-Level Cell (SLC) flash memory. This technology is produced at fabrication plants in Yokkaichi, Japan, where SanDisk and its partner, Toshiba Corporation, share the output. The two companies have co-developed many of the designs and technologies in NAND flash.

ULCPCs are inexpensive handheld laptops – smaller than a conventional notebook computer but larger than a mobile “smart” phone – that are easy to carry and cost in the range of $250 to $350. They enable consumers to browse the Internet on the go, with a user interface that replicates that of larger PCs. Originally, ULCPCs were developed as low-cost computing solutions for school children in developing nations. But the diminutive devices have caught on with adults, and now manufacturers are rolling out devices that are designed for general consumer use. Other names for these include Ultra-Mobile PC (UMPC) and Mobile Internet Device (MID).

“We’re excited to be involved in this emerging market of ULCPCs, which take the concept of affordability into new directions – ones that are ideally suited to the multiple benefits of SanDisk’s technology,” said Rich Heye, Senior Vice President and General Manager at SanDisk’s Solid State Drives (SSD) Business Unit. “Based on consumer response to some of the first ULCPCs, these devices are quickly developing a popular following. Our new pSSDs are enablers for manufacturers to create what could become the next wave of personal and portable computing devices.”

According to Joseph Unsworth, Research Director at Gartner, “The opportunity for SSDs in the emerging market of ultra low-cost PCs is promising.” Gartner expects the low-cost SSD category to grow from 635,000 units in 2007 to over 33 million units in 2012, and that represents a five-year compound growth rate of 117 percent.(3) “As semiconductor innovation enables more powerful functionality at lower prices, storage requirements will continue to be elastic, providing opportunities for companies that can command compelling low-cost SSD solutions,” said Unsworth.

The ULCPC category includes devices that exclusively use solid state drives, rather than conventional hard disk drives, for the system volume. The devices require small form factor and low power consumption, thus providing a good user experience and a full day’s work on a single battery charge. In addition to providing affordable computing solutions, these PCs are designed to withstand the heat, dust, humidity and unreliable power that can impact performance. Thus, ULCPCs leverage the main advantages of flash-based SSDs including reliability, power consumption, form factor and cost.

SanDisk Corporation, the inventor and world’s largest supplier of flash storage cards, is a global leader in flash memory – from research, manufacturing and product design to consumer branding and retail distribution. SanDisk’s product portfolio includes flash memory cards for mobile phones, digital cameras and camcorders; digital audio/video players; USB flash drives for consumers and the enterprise; embedded memory for mobile devices; and solid state drives for computers. SanDisk (http://www.sandisk.com/corporate) is a Silicon Valley-based S&P 500 company, with more than half its sales outside the United States.

(2) 1 megabyte (MB) = 1 million bytes, based on internal testing; performance may be lower depending upon host device.