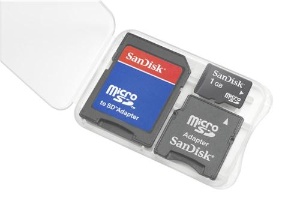 SanDisk Corporation (NASDAQ:SNDK) today introduced the microSD™ Multi SD™ Kit, bringing together in one package a microSD flash card with a miniSD™ adapter and a standard SD adapter, at the 3GSM World Conference 2007, where SanDisk is demonstrating products in booths 7C62 and 8C74.

The microSD Multi SD Kit removes confusion for consumers and retailers in selecting the correct card for a mobile phone, because the kit supports all mobile phones with SD-based card slots. According to SanDisk research, 87 percent of the latest mobile phone models with card slots are designed for either microSD, miniSD or standard SD.

“Consumers, when shopping for memory cards, don’t always know what type of SD slot is in their mobile phone. The microSD Multi SD Kit makes the purchasing decision a snap, because the card is guaranteed to fit — either directly through a microSD slot, or by using the adapters for miniSD or standard SD slots,” said Jeff Kost, vice president and general manager of mobile consumer solutions for SanDisk. “Retailers also get a break, because sales associates can focus on the benefits of added capacity rather than worrying about compatibility.”

The kit makes it easy to enjoy music, photos, video clips and personal files on multiple devices. For example, a large video clip could be downloaded through a laptop computer and transferred to the microSD card using the kit’s standard SD adapter. The microSD card could then be placed in a phone with either a miniSD or microSD slot. The kit is also compatible with personal electronics other than mobile phones, including SD digital cameras, as well as SanDisk’s Sansa e200 series, Sansa Connect™, Sansa Express™, and Sansa c200 series of MP3 players. This flexibility makes it more likely consumers will use their portable devices, especially mobile phones, to enjoy music, photos and video.

The microSD Multi SD Kit comes in three capacities: 512 MB, 1GB and 2GB.(1) The product is available now in Japan. It will be available in the United States and Europe in March, in Canada in Q2. Pricing in the U.S. and Europe has yet to be announced. The product may be sold under other names outside of Europe.

SanDisk is the original inventor of flash storage cards and is the world’s largest supplier of flash data storage card products, using its patented, high-density flash memory and controller technology. SanDisk is headquartered in Milpitas, California, and has operations worldwide, with more than half of its sales outside the U.S.

SanDisk’s product and executive images can be downloaded from http://www.sandisk.com/corporate/mediakit/