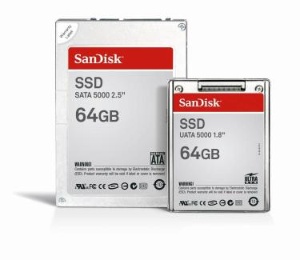 Reaching for the “sweet spot” of memory storage for laptop computers, SanDisk Corporation (NASDAQ:SNDK) today expanded its line of solid state drive (SSD) products with the introduction of a 64-gigabyte (GB)(1) SSD aimed at both enterprise users and early adopter consumers such as gamers. SanDisk 1.8-inch UATA 5000 and 2.5-inch SATA 5000 SSD products, which already are available in a 32GB capacity, are compatible as drop-in replacements for hard disk drives in most mainstream notebook computers.

The announcement was made at Computex Taipei 2007, where SanDisk is showcasing its comprehensive line of storage products for use in industrial and system-level embedded applications. SanDisk’s new 64GB SSD will be on display in Hall 1 in Booths C1000, 1002 and C1004 along with other SanDisk OEM embedded flash storage products such as iNAND™ and mDOC H3.

“Laptop manufacturers have requested more memory capacity for systems that use the Microsoft Vista platform, which can require a number of preloaded accessories and security suites,” said Doreet Oren, SanDisk director of SSD product marketing. “Also, there is interest in developing laptops for gaming, and the SSD is well-suited for the performance and memory requirements of those users. Thus, by offering greater capacities on our SSD products, we are making our products more appealing to a wider customer base.”

SanDisk SSD products are available now to manufacturers. The company plans to offer 64GB engineering samples in the third quarter, with mass production planned to commence prior to the end of the year. More information about SanDisk SSD products is available online at http://www.sandisk.com/ssd.

SanDisk and the SanDisk logo are trademarks of SanDisk Corporation, registered in the United States and other countries. Other brand names mentioned herein are for identification purposes only and may be the trademarks of their respective holder(s).