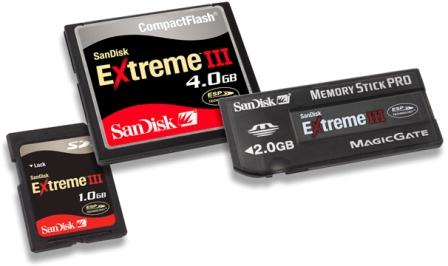 SanDisk Corporation (NASDAQ:SNDK) today announced the addition of new card capacities to its Extreme III line of flash cards for professional digital cameras that are double the highest capacity points currently available. The new cards include the 8-gigabyte (GB)1 CompactFlash, 2GB SD™ and 2GB Memory Stick PRO Duo™ digital film cards. The announcement was made at the Photo Marketing Association trade show where SanDisk is demonstrating products in booth #2741.

“Many photographers are wary of using cards that are larger than 1GB because they don’t want to ‘put all their eggs in one basket,’ so to speak,” said Jonathan Torgovnik, contract photographer for Newsweek magazine. “While that’s a valid concern, I shoot RAW so using large capacity cards is a must. It also lets me concentrate on taking pictures rather than worrying about a pocket full of lower capacity cards that can easily be lost or misplaced.”

Tanya Chuang, SanDisk retail product marketing manager, said, “The SanDisk Extreme III line offers professional photographers an ideal combination of reliability, performance and capacity to match their shooting and workflow requirements. These are the highest performance cards you can get in CompactFlash, Memory Stick PRO Duo and SD card formats.”

SanDisk Extreme III cards are designed to withstand the industry’s widest guaranteed operating temperature range from a freezing minus 13F (minus 25C) to a scorching 185F (plus 85C). The cards also include RescuePRO software that allows photographers to easily recover accidentally deleted images, lost digital images or data.

SanDisk Extreme III cards carry a 10-year warranty in Europe, the Middle East and Africa but will have a lifetime limited warranty in the rest of the world. Photographers who purchase the cards also will have access to a dedicated toll-free number for technical support questions. The RescuePRO image recovery software on the cards is compatible with both Windows and Mac and requires no driver download or special card reader.

SanDisk is the original inventor of flash storage cards and is the world’s largest supplier of flash data storage card products using its patented, high-density flash memory and controller technology. SanDisk is headquartered in Sunnyvale, CA and has operations worldwide, with more than half its sales outside the U.S.

Images of SanDisk products are available at http://www.sandisk.com/corporate/media.asp

SanDisk, the SanDisk logo, SanDisk Extreme and RescuePRO are trademarks of SanDisk Corporation, registered in the U.S. and other countries. SanDisk is an authorized licensee of the SD trademark. Memory Stick PRO Duo is a trademark of Sony Corporation. Other brand names mentioned herein are for identification purposes only and may be trademarks of their respective holder(s).