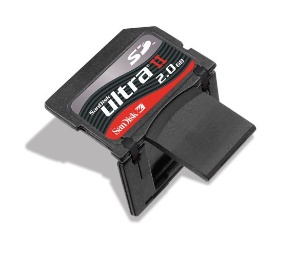 SanDisk Corporation (NASDAQ:SNDK) today introduced a 2-gigabyte (GB)1 SanDisk Ultra II SD™ Plus card, thus doubling the capacity of its award-winning storage card that combines USB connectivity and flash memory storage. The card looks and functions like a typical SD card and its high speed makes it ideal for digital cameras, camera phones and digital video cameras. Folding the unique card in half reveals a high-speed USB 2.0 connector that plugs into any USB port to easily and quickly transfer photos or other data to a computer without the need for a separate card reader.

The announcement was made at the annual Photo Marketing Association (PMA) Show at the Orange County Convention Center where SanDisk is demonstrating products in Booth #2741.

The SanDisk Ultra II SD Plus line features write speeds of 9 megabytes (MB) per second and read speeds of 10MB/sec2. The cards are targeted at enthusiast and prosumer-level digital photographers with 5 mega-pixel or higher resolution digital cameras that require significantly faster flash memory film cards. The faster cards allow photographers to shoot images in rapid sequence and minimize the lag time between shots.

“The SanDiskUltra II SD Plus card is really convenient to use,” said Tanya Chuang, senior retail product marketing manager at SanDisk. “With two gigabytes of capacity you can take many hundreds of high-resolution photos and transfer the images to a computer quickly and easily with the built-in USB connector. We have received an overwhelmingly positive response to the SanDisk Ultra II SD Plus line from both consumers and reviewers alike and have won numerous awards for its innovative design and performance.”

Pricing and Availability
Suggested retail prices and availability are as follows: 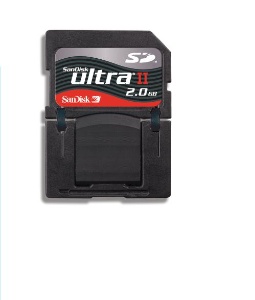 SanDisk is the original inventor of flash storage cards and is the world’s largest supplier of flash data storage card products using its patented, high-density flash memory and controller technology. SanDisk is headquartered in Sunnyvale, CA and has operations worldwide, with more than half its sales outside the U.S.

SanDisk’s product images can be downloaded from http://www.sandisk.com/corporate/media.asp

SanDisk, the SanDisk logo, CompactFlash and SanDisk Ultra are trademarks of SanDisk Corporation, registered in the U.S. and other countries. SanDisk is an authorized licensee of the SD trademark. Memory Stick PRO is a trademark of Sony Corporation. Other brand names mentioned herein are for identification purposes only and are trademarks of their respective holder(s).