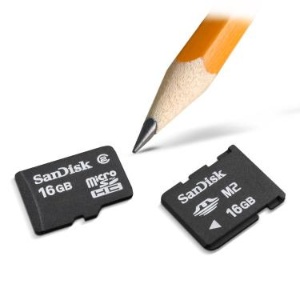 The fingernail-sized 16GB memory cards allow consumers to “wake up” the many storage-intensive features offered by today’s portable handsets such as music and video playback, high-definition digital camera functions, gaming and GPS applications. In addition to the mobile phone, consumers can use the 16GB microSDHC card in a multitude of other devices, including video cameras, GPS receivers or MP3 players with a microSD™ slots such as SanDisk’s Sansa players.

“Handsets have become far more than just phones – they’ve become mobile jukeboxes, mobile offices, even mobile movie theaters,” said Avi Greengart, Research Director for Mobile Devices at Current Analysis. “Flash memory cards have increased in storage capacity, but even an 8GB card may be too small for anyone with GPS map data, a few movies, a game or two, a presentation file and other applications. There is an acute need for more mobile storage capacity. 16GB gives consumers the ability to carry their digital content with them and still have room to do more with their mobile phones.”

Expected Pricing, Availability and Product Information
SanDisk’s 16GB microSDHC card has an MSRP of $99.99 and the 16GB M2 card has an MSRP of $129.99. The new 16GB capacity will be available at Best Buy Mobile stores in October and Verizon Wireless stores in November — the only major retailers in the United States to carry this mobile storage capacity in 2008.

MicroSD cards are designed for slot-equipped legacy mobile phones and can hold a maximum capacity of 2GB. Today’s microSDHC cards are available in 4GB, 8GB and now 16GB, are ideal for newer mobile phone models, most of which are compatible with these higher capacity cards. The Memory Stick Micro (M2) cards are designed for Sony Ericsson’s new generation of mobile phones, all of which are compatible with the 2GB, 4GB, 8GB and 16GB capacity levels. SanDisk’s 16GB mobile memory cards come with a five-year limited warranty.

To learn more about SanDisk’s Wake Up Your Phone™ initiative, which educates consumers about the benefits of using memory cards in their mobile phone slots, visit www.wakeupyourphone.com. For more information about SanDisk’s mobile phone memory products, see www.sandisk.com/mobile.