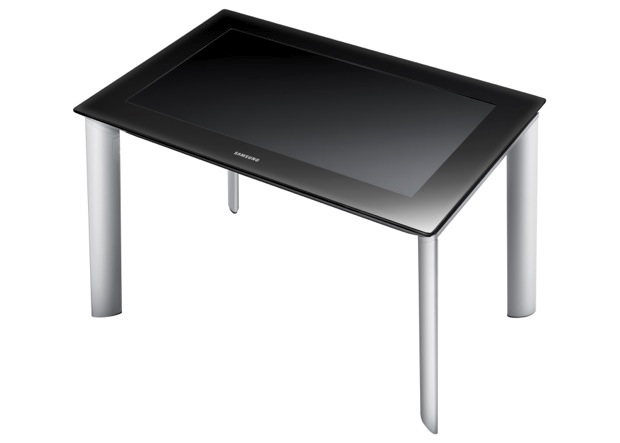 Samsung SUR40 is the new generation of Microsoft Surface experience featuring PixelSense technology, which gives LCD panels the power to see without the use of cameras. Building from the innovation of the first version of Microsoft Surface and Samsung's leading display technology, it is now possible for people to share, collaborate and explore together using a large, thin display that recognizes fingers, hands and other objects placed on the screen.

The Samsung SUR40 with PixelSense technology makes it possible for people to share, collaborate and explore together using a large, thin display. Recognizing up to 50 points of simultaneous touch, including fingers, hands and other objects placed on the screen, it has been well-received by new and existing Surface customers as companies such as Dassault Aviation, Fujifilm Corp. and Royal Bank of Canada prepare to deploy units around the globe in early 2012.

Thin Form Factor with Multiple Configuration Options
The product is four inches thin, which makes it easy to use in a horizontal deployment, hang on the wall with the VESA mount, or embed in walls or custom enclosures. There are standard legs available or a customer can design and attach their own.

PixelSense
PixelSense allows an LCD display to recognize fingers, hands, and objects placed on the screen, including more than 50 simultaneous touch points. With PixelSense, pixels in the display see what's touching the screen and that information is immediately processed and interpreted.

Microsoft Surface
Microsoft Surface provides business customers a premier touch-first experience for their end-users, built on the principles of direct interaction and together computing, with a new look and feel. It also allows commercial application developers to use a new version of the Microsoft Surface SDK and familiar Microsoft development tools to take full advantage of the massive multi-touch and object recognition capabilities of PixelSense and deliver experiences not possible on any other platform.

V3.co.uk8 years ago
You Are Here