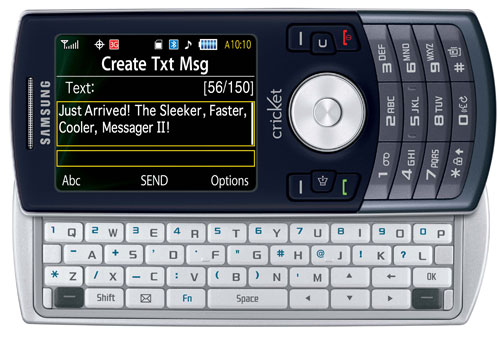 The Samsung Messager II brings everything to a power texter’s fingertips for personal email, SMS and MMS, and users can customize their own devices with downloadable content and Bluetooth file transfer profile. Cricket MyHomeScreen provides access to news, sports, entertainment and weather at users’ fingertips. Additional features like a 2.0 Megapixel camera, Stereo Bluetooth and Mobile Video will ensure Cricket customers aren’t just talking and texting, but able to share those memorable moments while on the go, too.

“The original Messager was an all-time favorite among Cricket’s customers because it is an easy-to-use device for power texters. Cricket customers tend to be more active texters than the average wireless users; in fact 52% send at least one text per day compared with an industry average of just 33%,” said Matt Stoiber, vice president and general manager of devices for Cricket. “The Messager II builds on that by providing the same easy text features with a sleeker design and 3G speeds.”