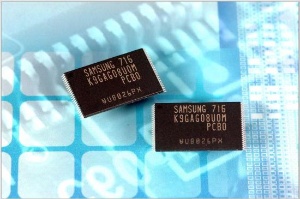 Samsung Electronics Co., Ltd., a leader in advanced semiconductor technology, announced today that it has become the first to begin mass producing 16 gigabit (Gb) NAND flash, the highest capacity memory chip now available. The company said it will fabricate the devices in 51 nanometers (nm), the finest process technology to be used in memory mass production to date.

“In rolling out the densest NAND flash in the world, we are throwing open the gates to a much wider playing field for flash-driven consumer electronics,” said Jim Elliott, director, flash marketing, Samsung Semiconductor. “To minimize production costs and improve performance, we have applied the finest process technology a ‘half generation’ ahead of the industry, which is introducing 55nm and higher.”

The new 16Gb chip which has a multi-level cell (MLC) structure can facilitate capacity expansion by offering 16 gigabytes (GBs) of memory in a single memory card. Furthermore, by applying the new process technology, Samsung has accelerated the chip’s read and write speeds by approximately 80 percent over current MLC data processing speeds.

NAND flash memory reads and writes data in units called “pages.” The 60nm NAND flash memory is designed with a 2 KiloByte (KB) page size, but the 51nm 16Gb version can process data in 4 KB pages, nearly doubling the data rate. The product also maintains the same 4 bit error-correcting code (ECC) capability as that of 60nm NAND, allowing customers to use existing system interfaces with only minor firmware upgrades. With its 4 bit ECC, Samsung eliminates the need to secure a better ECC capability to assure sufficient reliability, which would have required new costly controllers.

Samsung will offer an optimized suite of Flash software and firmware-incorporated storage devices for music phones and MP3 players to support 4KB pages. It also will provide a multi-plane performance optimization feature and wear-leveling for improved reliability. Memory cards and MP3 controllers to support the 4KB-page are already available.

Technology migration to 16Gb is expected to boost the recent explosive demand for high-density data storage in high-end music phones and the phenomenal trend toward user created content (UCC). As the demand for video content grows stronger by the day, products that feature extended recording time of high-resolution video footage, including mid-to-high-range digital cameras, will particularly benefit from the high capacity and performance of 16Gb NAND flash memory.

With support technology in place, demand for 16Gb NAND flash memory is expected to grow rapidly, pushing this new chip into the mainstream market beginning late this year. Aggregate global sales through 2010 are estimated to be US$21 billion.